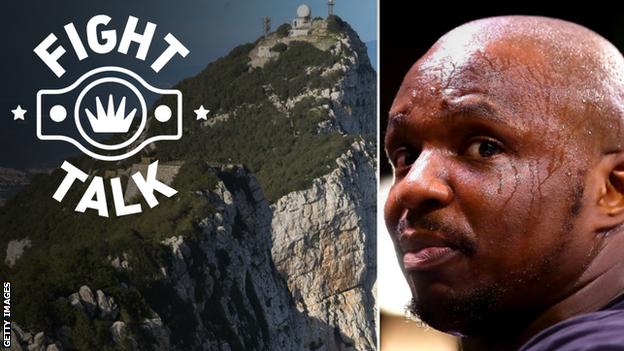 In this week’s Fight Talk we take a look at a quirky fight venue, focus on a man some say is the best trainer right now and ask what Josh Kelly can do after a tough defeat at the hands of David Avanesyan. There’s also some praise for the men in the corner and a bit of advice from Tony Bellew.

Fans at ‘The Rumble on the Rock?’

“It will be wild out there.”

Promoter Eddie Hearn has given Gibraltar and its 34,000 residents a big build-up.

That’s because boxing (and big-time boxing at that) is heading there when Dillian Whyte takes on Alexander Povetkin on the now rearranged date of 27 March.

Whyte – knocked out by Povetkin in August – has faced logistical issues around getting back to the UK from his Portugal training camp and hence a new venue was sought. Povetkin will at least now get to see the Rock of Gibraltar rather than being confined to a ‘bubble’ in a Covid-secure hotel somewhere in the UK.

“Gibraltar welcomed us with open arms,” ​​Hearn told BBC Radio 5 Live Boxing. “So ‘The Rumble on the Rock’, we’re glad to get it locked in.

“The vaccination programme in Gibraltar is world class and we believe we are going to have fans there. I think that will be important to Dillian Whyte. This is absolutely everything to him this fight. Coming off the fight last time out, looking for a world heavyweight title shot, it’s a must win.

“So we’re on, 27 March, a heavyweight cracker. It will be wild out there, it will be bizarre and in these times you have to think on your feet.”

Mexican fighters once again spent the weekend underlining why they are more than a bit handy in the ring.

And it sparked praise for one man as the stand-out trainer of current times. Eddy Reynoso now guides the careers of Saul ‘Canelo’ Alvarez – who recently beat Britain’s Callum Smith – as well as Valdez and Ryan Garcia – who overcame Britain’s Luke Campbell earlier this year.

What now for Kelly?

Where there was once eye-catching hooks and silky footwork, now there is soul searching in the wake of Josh Kelly’s first career defeat at the hands of Russia’s David Avanesyan.

The stoppage loss left some saying Rio 2016 Olympian Kelly is not suited to the professional side of the sport, while others offered sympathy towards the Sunderland man.

“I hope Josh doesn’t lose heart with it,” promoter Hearn told IFL TV. “He believed he was good enough and came up short. There’s no disgrace in losing to a world-class fighter.

“He is huge at 147lbs and I would like him move to 154lbs. He’d be more comfortable and robust there. It will take him a while to get over this. He will be really disappointed as he believed this would be a huge year for him and now it’s about a comeback. “

Fred Sirieix (the guy who runs the show on Channel 4’s First Dates) loves his boxing and went on Twitter on Saturday to say how well trainer Adam Booth did to throw the towel in on Josh Kelly.

Booth’s well-timed intervention was not the only one earning plaudits on the night.

At a time when judging gets criticized and controversy seems to reign at show after show, at last there was positivity across social media, notably when Rylan Charlton’s corner threw the towel in with his man looking vulnerable in defeat by Florian Marku.

Many a man in the corner has frozen at the key moment and many have faced criticism from their own fighter for ending things early. In this most dangerous of ventures, seeing praise for such a quick and pressured decision is surely a good thing?

Fights behind closed doors have been thrown up shocks, unbeaten records have been shattered and egos dented in recent weeks, so the final word in this week’s Fight Talk offers advice to fighters out there (and if it were read aloud in a Rocky movie people would undoubtedly start saying it’s transferrable to wider life).

In the wake of Kelly’s defeat on Saturday, former world champion Tony Bellew tweeted:external-link “The hardest part for the fighters who lost last night and recently is the next day! It’s also the most important.

“A lot of guys go into the blame game now. ‘It’s his fault for this and it was his idea to do that’. No!

“You chose to fight and you are the responsible one.”

“You trained for weeks / months so don’t do the easy thing and blame the trainer. It’s not his fault you didn’t perform. You said you trained well. Don’t blame the promoter because you agreed to this fight. He only made the suggestion.

“The next step you need to take is to look back at the fight and be honest with yourself! Accept your weaknesses and look to go back and work on them.”

“Take control of your career. Always remember you take the punches, no one else! Trainers give advice, promoters make suggestions, you make the decisions.”

Go and make those decisions, guys. We’ll catch you next week.