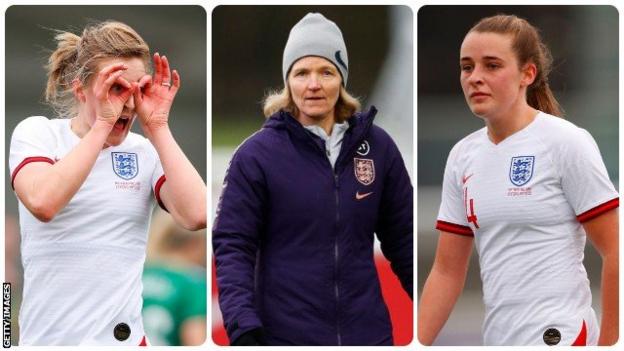 Six goals, a first Ellen White hat-trick and four debuts – it was the best possible start for interim manager Hege Riise’s short-term reign with England as they comfortably defeated Northern Ireland in their first game in almost a year.

And while midfielder Jill Scott stole the show on her 150th appearance, there were plenty of stand-out performers including White, defender Lucy Bronze and debutant Ella Toone.

With Team GB selection on the horizon, did anyone play their way into contention? What was different about England under Riise? And how did the new players get on?

Who shone before Team GB selection?

It has been confirmed Riise will be part of the coaching staff for the Olympic Games this summer – though her exact role is yet to be determined.

She should, however, have a say in who will be selected, and when asked who stood out for her in Tuesday’s friendly, she said “Ella Toone, who I haven’t seen that much, impressed me with her debut”.

The 21-year-old Manchester United forward came on as a half-time substitute and scored from the penalty spot to cap off what has been a terrific season so far with her club.

“Her passing, her vision for the game … She made it easy to find the pocket for the 10 player, easily,” added Riise. “Her footwork, covering space … That was a good debut – and scoring a goal as well!”

Riise also singled out Manchester City striker White, who started ahead of Chelsea’s Bethany England and made the most of it with her first hat-trick.

“This is my first game and to see them in this environment helps me make decisions,” added Riise. “Most of the players showed their character today. It will be difficult to pick that squad.”

‘It looks energised and fun’

The friendly, played at St George’s Park training base, was England’s first game since a 1-0 loss to Spain in March last year and their first since the departure of manager Phil Neville.

They had stuttered to just three wins from Neville’s final nine games in charge but Riise said his performance looked “energized, fun and focused”.

The Norwegian had said prior to this match her role was to “develop the ability and playing style” of England’s stars and called for more attacking flair.

They ultimately produced with six goals, albeit against a Northern Ireland side who sit 43 places below in the world rankings, but it was a result Riise said “was great regardless”.

“The players put on everything [in training], it looks energized, fun, focused and that’s what I felt during the game, “she added.” They wanted to play, keep moving, keep moving the ball and also scoring goals. “

‘Running around with a smile on my face’

White’s performance was impressive as she moved on to 39 international goals – first by capitalizing on a defensive mistake, before nodding in Bronze’s cross and then finishing a pass from Scott. She had another goal judged out for offside.

The striker said she was “really proud” to score her first hat-trick and she was “running around with a smile on my face” playing in an England shirt again.

“I actually missed my husband’s birthday on Sunday so [the goals] are definitely dedicated to him, “said White.” I’m taking the match ball home and hugging that all day. I’m just really enjoying playing football at the moment. “

Riise said all four substitutes “seemed comfortable” when they came on and “there was a good connection between the players” that were already on the pitch.

“Changing the goalkeeper was good for experience as we have three young goalkeepers with us,” added Riise. “Ebony [Salmon] coming in, you can see that she can adapt. She still has some work to do with the pace of the game.

“Lotte [Wubben-Moy] came in and was a presence also. It was good to see those. “