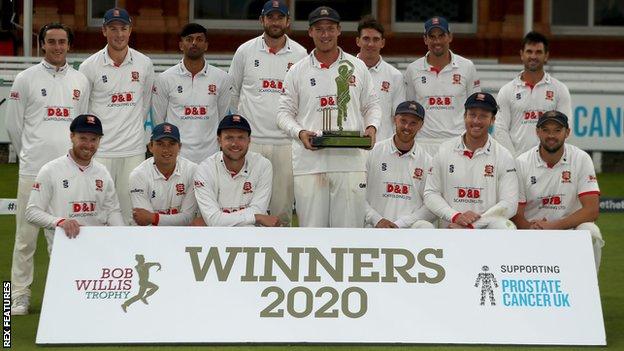 The County Championship makes a welcome return on Thursday after it was shelved in 2020 because of the Covid-19 pandemic.

With restrictions slowly being lifted in England and Wales, fans can once again look forward to a full season of domestic cricket, although it’s going to be a bit different to what we’ve been used to.

BBC Sport takes a closer look at how the 2021 campaign is going to work and some of the players to look out for.

The 18 first-class counties will be split into three groups of six, a change from the eight-side Division One and 10-team Division Two in place when the County Championship was last played in 2019.

Each county will then play 10 four-day games in the group stage – five home and five away – with the final round in mid-July.

The competition takes a break for the Hundred and One-Day Cup until 30 August, when the top two teams in each group will go through to a second group stage called Division One, carrying over the points from the matches played against each other.

Division One’s six teams play a further four matches against those they have not already met, with the side that finishes top of Division One crowned 2021 County Championship winners.

The top two teams in Division One will contest the five-day Bob Willis Trophy final at Lord’s, starting on 27 September.

The remaining 12 teams that do not go into Division One will move into Divisions Two and Three, in which teams will play another four matches.

With England not returning to Test match action until 2 June, the back-to-back nature of the first nine rounds of the County Championship will work in several players’ favor.

A number of names will be plying their trade in the Indian Premier League, but the red-ball experts will have their chance to reacclimatise after a winter touring the sub-continent.

England captain Joe Root is expected to line up for the first time in a first-class fixture against his younger brother Billy as Yorkshire take on Glamorgan.

Root will definitely play in Yorkshire’s opening two fixtures, according to coach Andrew Gale, and is also expected to feature in a few more before the first Test against New Zealand.

While the England and Wales Cricket Board has yet to confirm the full availability of those on central contracts, also back in the county ranks will be openers Zak Crawley at Kent and Dom Sibley at Warwickshire.

Rory Burns will also be keen to make an impression, not just as Surrey captain but also to put himself back in the frame after he was dropped during the series in India. Ollie Pope will also be itching for some valuable time at the crease.

Dan Lawrence, not currently on a central contract, has a chance to build on the promise he showed in both Sri Lanka and India, as he returns to Essex’s middle order.

James Anderson and Stuart Broad will no doubt both feature for Lancashire and Nottinghamshire respectively in the early rounds, but expect their workloads to be closely monitored.

There’s also the chance for spinners Jack Leach and Dom Bess to settle back into county action after contrasting winters. Leach will return for another summer with Somerset, while Bess has made a permanent move north to try to secure more game time with Yorkshire.

Hoping to catch the selectors’ eye

Handed his first-class debut in the opening round against Glamorgan, the left-hander scored 459 runs at an average of 51 in his side’s run to the Bob Willis Trophy final, which included three centuries.

The last two of those came in big pressure circumstances too, as his unbeaten second-innings 107 against Worcestershire set up the win they needed to reach Lord’s.

Three weeks later in the final against Essex, he stepped up on the biggest stage with a sublime 116 in the second innings against arguably the toughest bowling attack in the competition.

Even more impressive was all of this came at the age of just 20 and he finished the competition as the third-highest run scorer.

With a full season ahead of him and potentially a chance for England to keep searching for the next top-order option, 2021 could be an even more exciting summer for the Devonian, who also bowls a handy bit of occasional left-arm medium pace.

Another young opener who made the most of the shortened red-ball campaign was Kent batsman Jordan Cox.

The right-hander, 20, packed a fair amount into the five rounds of fixtures, helping set a series of new Kent first-class records as he and Jack Leaning put on a partnership worth 423 against Sussex.

Cox finished the match with an unbeaten 238 but, a week later, had to sit out the action as he was found in breach of Covid-19 protocols having posed for selfies with young fans after his marathon effort.

The former England Under-19 international, who can also keep wicket, agreed a new deal until the end of 2023 at Canterbury during the winter and will hope some of the international experience of fellow top-order team-mates Joe Denly and Crawley will rub off on him.

In the inaugural summer of international bubbles, a seam bowler did his fair share of shadowing the England squad and, at one stage, almost stepped up for his Test debut when his county team-mate Jofra Archer served his own Covid-related suspension.

Sussex’s Ollie Robinson is far from a new name on the county circuit, but his stock has continued to rise in recent seasons on the south coast, especially under the watchful eye of former Sussex head coach Jason Gillespie.

Now with another former Sussex seamer in James Kirtley helping to lead the coaching effort at Hove, Robinson, 27, will hope to keep consistently taking wickets to stay in Chris Silverwood’s thoughts as a fast bowling option.

England have a lot of test matches on the fixture list this summer and if the policy from the winter of bowler rotation continues and injuries also occur, Robinson is sure to be in the frame if he can maintain his own form and fitness.

Sticking with the theme of tall, imposing seam bowlers with credit in the County Championship bank, Yorkshire’s Ben Coad will hope to be in the wickets early once again this season.

Like Robinson, he is also a 27-year-old right armer but offers perhaps a bit more in terms of movement off the pitch and in the air than perhaps steepling bounce and an injection of pace.

Useful tools to have which have been backed up by more than 150 first-class wickets since his debut in 2017, at an average of just under 20.

His opportunities were limited to just two appearances in the Bob Willis Trophy last summer, but he is likely to start this campaign for the White Rose alongside other notable seamers Duanne Olivier and Matthew Fisher.

Someone else who will also be watching on from close quarters in the opening rounds will be none other than England captain Joe Root.

Another player who spent a prolonged period last summer around the England bubble was Gloucestershire wicketkeeper-batsman James Bracey.

The 23-year-old left-hander already has England Lions experience and his ability to bat long periods and take the gloves could work in his favor when it comes to giving England flexibility in their selection.

But, after a summer of switching between hotel quarantine at Old Trafford and the Ageas Bowl, Bracey has not made a first-class appearance for his county in more than a season.

He will no doubt be keen to make up for lost time after being a key part in Gloucestershire’s promotion to Division One in 2019.

This time around in the adapted format, he could find himself up against some imposing seam attacks from the likes of Somerset, Surrey and Hampshire in Gloucestershire’s group.

More early season runs and he will no doubt find himself slotting back into international recognition.

Counties can now field two overseas players in the County Championship instead of one, following the ending of Kolpak registrations after the UK’s exit from the European Union.

So who are the international stars to look out for in 2021?

The Australia opener returns for a second spell in the north east following a successful stint in 2019.

Bancroft, 28, scored 726 runs at an average of 45.37 in nine County Championship games two years ago.

He will link up with Durham, under new captain Scott Borthwick, when his commitments with Western Australia end next month.

The West Indies Test captain arrives in Bristol in fine form having scored 126 and 85 against Sri Lanka last week.

The 28-year-old has plenty of experience in England, having previously had spells at Yorkshire, Nottinghamshire and Glamorgan.

Brathwaite is available for the first eight rounds, but self-isolation protocols on his return from the West Indies mean he is unlikely to be available for Gloucestershire’s opening game against Surrey.

Having moved above Bancroft in the pecking order for one of Australia’s opening spots, Harris comes to Leicestershire with high expectations.

It’s a first spell in county cricket for the left-hander who has played 10 Test matches for his country – the most recent coming against India in January.

Harris, 28, will link up with the Foxes once Victoria’s involvement in the Sheffield Shield finishes.

The former South Africa batsman, who was signed by Surrey on a two-year Kolpak deal for 2020 and 2021, will now slot into the top order as an overseas player.

Amla’s stats are up there with the finest the game has seen – 55 centuries in Test and ODI cricket, over 17,000 runs in both formats and a top Test score of 311 not out.

Surrey will hope to see more of Amla than last year in the first-class game, when Covid-19 travel restrictions meant he was limited to just one Bob Willis Trophy appearance.

The Antiguan paceman is set to play six County Championship games for the Pears starting in round two after a stint of self-isolation.

Worcestershire will need the 24-year-old to hit the ground running as they visit the domestic kings of the past few seasons, Essex, in round one.

Joseph has taken 38 wickets in 16 Tests for West Indies, is a useful lower-order batsman, and made Indian Premier League history in 2019 when he took 6-12 on his Mumbai Indians debut – the best bowling figures in the competition’s 14-year history.