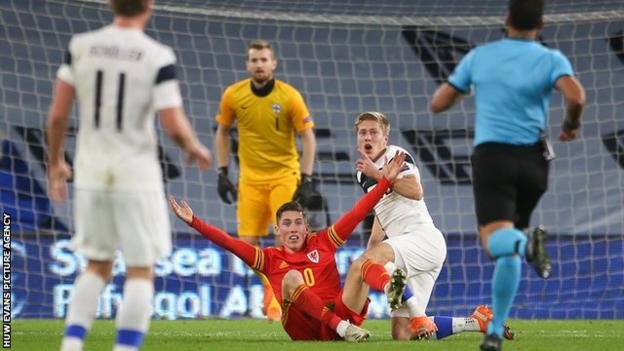 Finland’s Jere Uronen was sent off after only 12 minutes for a foul on Harry Wilson, who then fired Wales in front with a fine low finish after a through ball from Gareth Bale.

Daniel James’ 20-yard firecracker doubled their lead early in the second half, before the Finns hit back with a goal by Teemu Pukki – the first Wales had conceded in more than 12 hours of competitive football.

The visitors had a handful of other chances as they sought an improbable victory which would have seen them win Group B4.

But, despite their second-half wobble, Wales were ultimately comfortable victors and put the result beyond doubt with Kieffer Moore’s late header from James’ cross – a goal that also extended their unbeaten run in competitive matches to 11 for the first time in their history.

Wales can now look forward to a first campaign in the top tier of the Nations League in 2022, which could see them face some of Europe’s leading sides such as France, Spain and Germany.

Should they miss out on automatic qualification or a play-off place for the tournament in Qatar, their status as Nations League group winners means they are virtually guaranteed a play-off spot via an alternative route.

Considering this was a match in which either Wales or Finland could have won the group, this was a remarkably straightforward evening for the home side on an evening of relatively high stakes.

Having scored only four goals in their previous five matches of the campaign – despite winning four and drawing one of them – this was the first time Wales have scored two or more goals in one match since a 2-0 triumph over Hungary in November 2019 to seal qualification for Euro 2020.

Needing only a draw to win their Nations League group, Wales assistant manager Robert Page stuck with the five-at-the-back formation which had seen them go seven consecutive competitive matches without conceding a goal.

Their hopes of extending that run were given a significant early lift when Finland were reduced to 10 men after just 12 minutes.

If there were assists awarded for opposition red cards, then Wales goalkeeper Danny Ward would have got one for Uronen’s dismissal.

Ward caught a Finnish free-kick and, spotting the visitors’ covering defenders had pushed up beyond the halfway line, launched a long clearance over the top for Wilson to chase.

It was perfectly weighted, allowing Wilson to get in front of Uronen, who then wrestled the Cardiff City midfielder to the ground, prompting Spanish referee Jesus Gil Manzano to show him the red card.

Bale’s resultant free-kick was comfortably saved by Lukas Hradecky but, with 78 minutes to play against 10 men, Wales sensed a golden opportunity.

They were soon dominating possession against their deep-lying opposition and creating chances, the first of which saw Bale’s sliding shot brilliantly kept out by Hradecky.

Wales continued to probe and the opening goal arrived after 29 minutes, Bale threading a delicate through ball to Wilson, who finished confidently with a low first-time shot.

Not content with his side’s 1-0 lead, Page replaced a defender, James Lawrence, with a striker, Moore, at half-time.

That statement of intent seemed to work and, within a minute of the second half, they doubled their advantage as James unleashed a fierce 20-yard shot which arrowed into the top corner.

At this point, it seemed Wales could relax, the job seemingly done.

Bale was substituted after an hour – much to the approval of his Tottenham manager Jose Mourinho – and the hosts looked like they could coast the closing 30 minutes.

But Finland had other ideas. Joe Rodon, given the captain’s armband when Bale went off, could not cut out Robin Lod’s lofted pass and Pukki took full advantage, shooting powerfully beyond Ward.

That was a warning for Wales and they were given another soon afterwards when Nicholas Hamalainen had a shot saved by Ward.

That troublesome period for the hosts was short-lived and, with six minutes left, they truly put the game to bed when James’ lofted cross to the back post was nodded in by Moore.

The final flourish prompted huge cheers from the touchline, as Wales’ substitutes and coaches reflected on a job well done, sealing their Nations League group win.