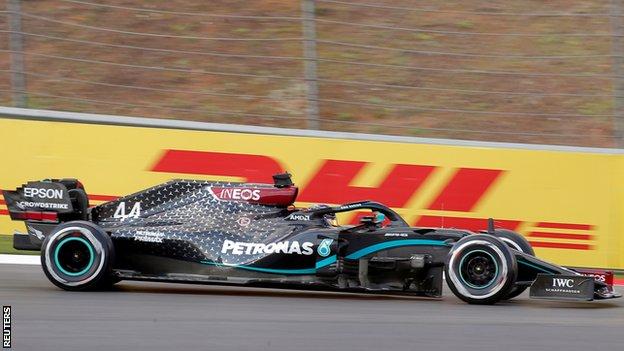 Lewis Hamilton, who can clinch a record-equalling seventh title on Sunday, was fourth fastest, 0.85 seconds off the pace.

His team-mate Valtteri Bottas was third, 0.575secs behind Verstappen.

Mercedes were struggling for grip even more than everyone else on a slippery Istanbul Park track surface.

The circuit, which last hosted a grand prix in 2011, was resurfaced just two weeks ago, and bitumen leaking out of the track surface gave the circuit a sheen as cars ran on it on Friday.

This meant lap times were hugely slower than predicted – and even 13 seconds off those set in qualifying in 2011, since when Formula 1 cars have become several seconds a lap faster.

All the drivers were complaining of a lack of grip as a result, and there were a number of spins.

Despite Mercedes’ struggles in terms of headline lap times, there was strong evidence that they will remain the team to beat as they were comfortably quickest on the race-simulation runs late in the session.

Leclerc’s pace was encouraging for Ferrari, second fastest and just 0.4secs off Verstappen, while Alexander Albon had a positive day in the second Red Bull.

Although the British-Thai ended the day a second off Verstappen, he set a series of fastest laps and looked more comfortable than he has of late.

It could be a timely development for Albon, whose seat is under threat for next season with Red Bull deciding whether to stick with him or take on a more experienced proven driver such as Sergio Perez or Nico Hulkenberg.

Behind Albon, the Alpha Tauris of Daniil Kvyat were sixth and seventh, ahead of the second Ferrari of Sebastian Vettel, Lance Stroll’s Racing Point, and McLaren’s Lando Norris, who is celebrating his 21st birthday on Friday.

Williams driver George Russell was 17th, and one of those to spin. He is to receive a grid penalty for using more than the permitted number of engine parts this season, after exceeding his allocation of internal combustion engines, turbos and MGU-Hs, the hybrid device that recovers energy from the turbo.