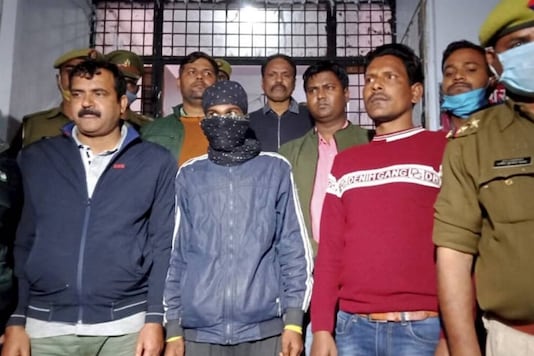 One of the accused was identified as Vinay Kumar, alias Lambu. (Image: PTI)

Police had on Friday said the other person held was a teenager but on examination of his Aadhaar card, it was found that he was major, according to the ASP.

The two people held in connection with the death of two teenage girls at an Unnao village were sent to 14-days judicial custody by a court here on Saturday. One of the accused who was said to be a teenager has been found to be major, a police official said. Three girls – aged 16, 15 and 14 had left home to bring fodder for cattle on Wednesday night. They were found in an agricultural field when they did not return home. Local residents had rushed them to a hospital where two of them were declared brought dead. The third girl was taken to a district hospital and later referred to a Kanpur health care facility where she is presently undergoing treatment, police said. According to ASP V K Pandey, both accused were sent to a 14-day judicial custody by the court on Saturday. One of the accused was identified as Vinay Kumar, alias Lambu.

Police had on Friday said the other person held was a teenager but on examination of his Aadhaar card, it was found that he was major, according to the ASP. Police had also said the matter was a fallout of a one-side love affair. The accused gave some pesticide with water to the three girls, “Lucknow Range IG Laxmi Singh had told reporters. The last rites of two teenage girls were performed on Friday morning amid tight security arrangements.

A seven-member Samajwadi Party delegation on Saturday met the victims’ family and took details of the case. Former MP Annu Tandon, who was among those who met the victims’ family on the instruction of party chief Akhilesh Yadav, said, “We have assured them that we are with them in this hour of crisis and would make all efforts to ensure that they get justice. “