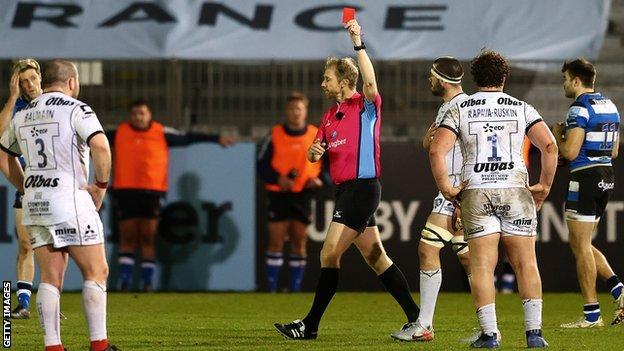 Rhys Priestland’s late penalty saw Bath edge out Gloucester in a scrappy West Country derby, in which both sides finished the game with 14 men.

Gloucester prop Val Rapava-Ruskin was rejected after only eight minutes for a high challenge on Josh Bayliss.

Taulupe Faletau’s try put Bath ahead just before the break, before Mike Williams was sent off after 51 minutes.

Lewis Ludlow’s 75th-minute try looked to have won it for the visitors but Priestland’s kick snatched the victory.

Cherry and Whites prop Rapava-Ruskin received his marching orders from referee Wayne Barnes after connecting with Bayliss’ head while running into contact with the Bath second row.

Bayliss was taken from the field for a head injury assessment, from which he would later return, and Gloucester were forced into a reshuffle, sending on prop Alex Seville for center Tom Seabrook.

Despite the setback, Gloucester were enjoying plenty of possession and territory, and two quick Bath infringements near their own line allowed Billy Twelvetrees to open up a 6-0 lead.

But the first half had a sting in the tail for the visitors when Bath substitute Jonathan Joseph sent a deft pass inside to Tom de Glanville who drew the last defender and sent Wales back row Faletau over the line. Priestland added the extras to give Bath a 7-6 half-time lead.

Priestland landed a penalty to extend the advantage but Bath’s momentum was checked shortly afterwards when Williams was sent off for a high tackle on full-back Kyle Moyle.

However, Bath pulled ahead ahead of another Priestland penalty, before Gloucester fought their way back into the game and Twelvetrees landed a penalty with nine minutes remaining to cut the lead to 13-9.

Gloucester thought they had won it with five minutes left on the clock, when winger Louis Rees-Zammit was given space to run across the field and put Chris Harris into space, with the Scot feeding Ludlow to score in the corner.

But Twelvetrees’ missed conversion would prove costly as Harris gave away a 78th-minute penalty, allowing Priestland to secure back-to-back Bath wins, and leave the Cherry and Whites rooted to the bottom of the Premiership.