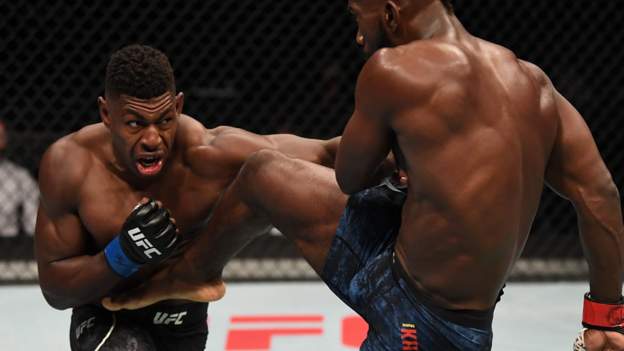 Joaquin Buckley admits he was “unknown” when he travelled to Abu Dhabi for his second UFC fight in October.

Things have changed a bit as he prepares for his third, against Jordan Wright at UFC 255 on Saturday.

Back in October, Buckley was battling through a fairly even middleweight bout against unbeaten fellow American Impa Kasanganay. Then Kasanganay caught a kick from his opponent midway through the second round.

And then came the moment that changed Buckley’s life.

With his left ankle still being held, the 26-year-old defied gravity by producing a spinning back kick which toppled Kasanganay.

The video clip on UFC’s Instagram accountexternal-link now has more than 6.6m views. Not only is it the favourite for knockout of the year, but many also argue it’s the best in MMA history.

“Now people know my name,” laughed Buckley. “The outpouring from thousands of people from all over the world, all messaging me at once… I never expected it to take storm like it did.”

It didn’t just send shockwaves through the MMA community – it inspired memes galore. Hollywood actors commented. Kanye West was “so energised” by the kick, he “had to release theme music”, playing the knockout on a loop in a video with his new track.

“That was awesome,” said Buckley. “I’m appreciative of Kanye West for throwing that out there. He’s a legend in the hip-hop community and for him to be inspired by my kick and come out with a classy hit like that is pretty cool. I’m grateful.”

While the kick was opportunistic, Buckley insists it was no fluke. He says the origin was a two-touch taekwondo kick he has practised “all the time”.

But to produce it in the octagon means he has written himself into UFC folklore. Six weeks on from the ‘kick heard around the world’, its impact is still being felt.

“People have seen me throw that kick before, they’ve seen me practise it,” said Buckley. “Everybody else was shocked – but they were just like ‘about time’.

“I can’t help but run through it, all the time people are tagging me in it. But I’m not really tripping off it. It was just a moment and now it’s time to make another one.”

It’s been some year for Buckley, who turned professional in 2014 and now has an 11-3 record.

He was working as a night-shift manager at a pharmacy when he got the call to make his UFC debut at short notice in August, losing to Kevin Holland.

Then he became a father before registering his first UFC win in devastating style, pocketing the $50,000 bonus for Performance of the Night.

When Buckley landed back in St Louis, he got the train home from the airport, but having announced his arrival in the UFC, he is keen to establish himself in MMA’s top promotion.

“I’ve used the knockout to network, to gain connections in the UFC I’ve never had before,” he added. “An extra $50,000 was awesome but the exposure is worth so much more right now.

“Having that kind of exposure is a big deal. It allows me to get more fights as people are coming after me, trying to get that name.

“I have an opportunity to do what I love to do and make a career out of it. It’s a blessing to be able to provide for my family at the same time.”

Buckley had been scheduled to fight next in January against compatriot Wright, who is 11-0 and also joined the UFC this year.

But it was brought forward to this Saturday, as one of the preliminaries at UFC 255 in Las Vegas, and Buckley says he feels “no pressure” to produce another highlight reel knockout.

“Expect fireworks, there’s nothing different,” he said. “Any time I go out there, it’s exciting. I don’t care whether I win or lose, as long as you’re entertained. That’s my job.

“I’m just going to go out there, have fun, do what I do and look for that finish again – hopefully in the first round.

“Jordan’s a great guy. I just feel sorry for him that he’s got to fight a person like me because I’m coming for the head, all day.”

But if there’s no sequel, Buckley will always have that kick.

“When I’m retired, they’re [still] going to be playing it,” he said. “That’s pretty cool.”