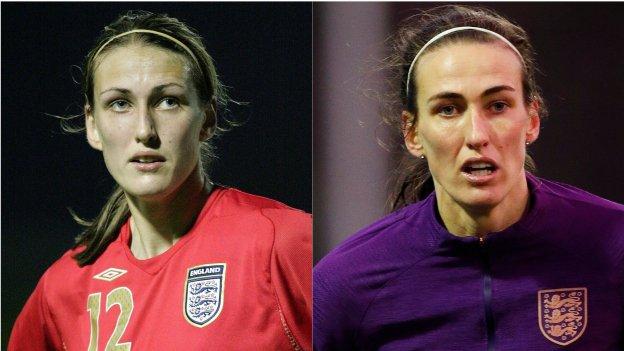 With the coronavirus pandemic preventing the Lionesses playing any competitive games since a 1-0 loss to Spain in March last year, it’s been an almost 12-month wait since the 34-year-old’s 149th game.

When Scott lines up in Tuesday’s friendly against Northern Ireland – which is live on the BBC Sport website, iPlayer and Red Button at 12:30 GMT – she will become only the second player to reach 150 caps for the Lionesses.

However the Manchester City midfielder will still be 22 games behind record-appearance holder Fara Williams and so knows a return to regular fixtures will be necessary if she is to stand a chance of surpassing Williams’ haul.

“I’ve waited a year for this one – so if I have to wait another 22 years maybe I won’t catch her,” Scott told BBC Sport.

“I never have these targets in my head. I did not think about my 100th cap until I was on 95 or 96 and then you see it is approaching.

“If it were to all end tomorrow I’d be gutted but I’d be proud of the career I’ve had. And if it goes on a few more years then fantastic because I’d love to make a few more memories in that England jersey. “

The debut: ‘It gives me goosebumps’

Scott’s England debut came in a 4–0 win over the Netherlands in August 2006, shortly after she had left Sunderland to join Everton.

Just mentioning that game gives me goosebumps. At the time I probably did not even believe I was stepping on the pitch to play for England.

You had so many fantastic players – Rachel Yankee, Kelly Smith, Fara Williams, Katie Chapman … to even be there with them, I probably didn’t feel I was good enough at the time.

I feel like now the time has flown by and I’m 34 still feeling like that 19-year-old kid.

I remember a lot, I’m sure Kelly got a hat-trick. She came off for me to go on.

I made a few darting runs from midfield because I had a bit ore energy then. I had a one-on-one with the keeper and put it wide and after the game everyone was like ‘that would have been perfect’.

But maybe that was a sign nothing was going to come easy from day one of my England career.

That World Cup goal: ‘I just panicked and hit it’

Jill Scott scored a remarkable long-distance goal against France in the quarter-finals of the 2011 World Cup, but England would go out on penalties after the game finished 1–1.

I scored quite a good goal that day and everyone says ‘talk us through it’ and I remember I was looking for Ellen White.

She’d made a run a and I thought ‘I’m never going to get the ball to her’. So I’ve managed to lob the keeper from about 30 yards out, I think via a toe-punt.

How everyone perceives that goal and how I see it in my head are different – I just panicked and hit it. That game always stands out because it was so close and it went to penalties and we were all devastated afterwards.

The bronze that could have been gold: ‘The end of an incredible journey’

Four years later England went one step further, reaching the semi-finals of the 2015 World Cup, where they would lose 2-1 to Japan, before beating Germany 1-0 in the bronze medal match.

That was a game that marked the end of an incredible journey.

There was so much hard work that went into that tournament. We wished it would have been gold but to have that bronze medal, it was a fantastic achievement for the team.

The tough love team-mate: ‘She was probably quite tough on me’

As a 19-year-old, Scott broke into the Everton team to play alongside Fara Williams, a player three years her senior and the only Lioness to have played more times for England.

When I was younger she was probably quite tough on me at Everton. Seeing this kid that came in and just wanted to run all over and Fara’s obviously such a great technician and tactically she is superb.

She was quite harsh but she knew I had a lot of potential, so I have to thank her from the bottom of my heart.

I always wanted to do her proud and for her to say ‘Jill you had a good game today’. When that happened it was the best moment in the world.

The influential coach: ‘She made me realize you have to commit 100%’

Mo Marley gave Scott her Everton debut and is considered to be one of a trailblazing coach across her coaching roles for clubs and England.

She always gave everything to the game. It wasn’t about money for her.

There weren’t a lot of resources back in the day but she always made sure you got the best treatment.

I know how many times she missed family events like weddings, Christenings and parties – it was always football.

She made me realize from a young age if you want this you have to commit to it 100% every day.