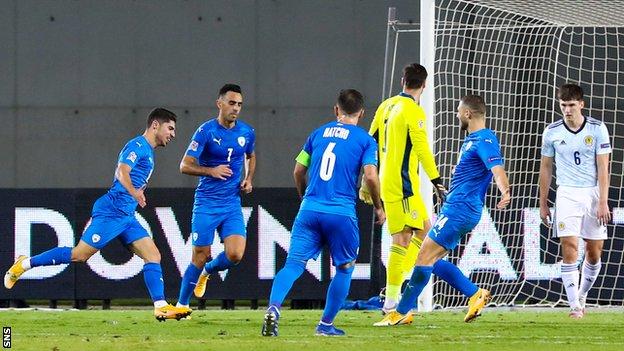 Scotland failed to add Nations League promotion to their momentous Euro 2020 qualification as they slipped to a limp defeat in Israel.

Matching the Czech Republic’s result at home to Slovakia would have elevated Steve Clarke’s men to League A.

But the Scots could not reach the level of their Euro play-off win over Serbia six days previously as Manor Solomon’s thudding strike condemned them to a second successive Group B2 loss.

Having followed qualification for their first finals in 23 years by losing in Slovakia to shatter their nine-game unbeaten run, Clarke’s team ended an historic week on a low in Netanya.

Having made eight changes in Slovakia, Clarke reverted to the starting line-up who had served him so well in Serbia.

That shootout success proved the Scots’ adeptness from 12 yards and they were screaming for a penalty in Netanya when Ryan Christie was clipped by Celtic team-mate Nir Bitton as he burst into the box, but Polish referee Pawel Raczkowski was unmoved.

It was a rare moment of early excitement between two sides who know each other inside-out, with this their fifth meeting in little over two years.

The tempo and cutting edge of recent Scotland performances was sorely lacking in a side looking jaded in the final tie of a gruelling triple-header. They did build up a head of steam as half-time approached as Stephen O’Donnell screwed wide before Ofir Marciano spectacularly clawed away John McGinn’s backward header from a Scott McTominay cross.

But it was Israel who found the breakthrough as Solomon was played in down the left, dropped the shoulder to leave McTominay floundering, and thumped a shot into the far corner.

Scotland needed a big turnaround. Yet Israel were inches from doubling their lead moments after the restart as Eran Zahavi flashed a shot narrowly past the post.

Clarke’s men kept plugging away and exerted a burst of promising pressure that culminated in Declan Gallagher failing to hit the target when he rose unchallenged.

With the Czechs 2-0 up before the hour, Scotland knew only victory would do. It never looked likely but wasn’t for a lack of trying. O’Donnell scuttled down the right and drew a diving save from Marciano, who then tipped over a miscued Kieran Tierney cross.

Eyal Golasa could have put the result beyond doubt had David Marshall not denied the substitute with a smart save with his legs.

Even a point proved beyond the Scots – a header from Scott McKenna rippled the side-netting and Leigh Griffiths fluffed a chance from eight yards – as they crashed back down to earth after the euphoric highs of Belgrade.

Man of the match – John McGinn

What did we learn?

Scotland need more goals and more options up front. They end the section having scored just five in six games and Lyndon Dykes is the only striker whose place in the squad is secure.

And while Euros qualification was the priority, back-to-back defeats has halted Scotland’s momentum at the wrong time, with a four-month break before the World Cup qualifying bid begins.

What did they say?

Scotland head coach Steve Clarke: “We shouldn’t forget how far we’ve come. But we also know how far we’ve got to go if we want to be regularly successful and regularly qualifying for tournaments.

“We have to be better, we have to improve.”

Scotland discover their 2022 World Cup qualifying opponents when the group-stage draw takes place on 7 December. The campaign then begins with a triple-header of ties between 24 and 31 March.

What the stats say