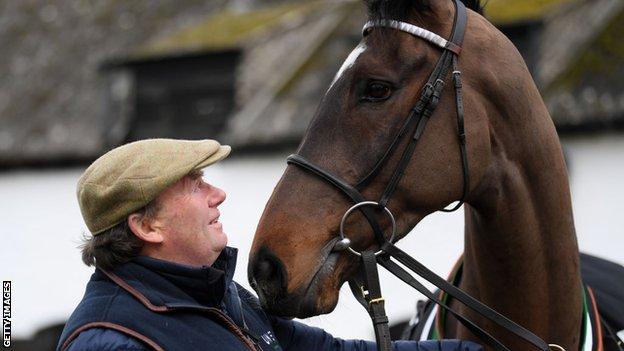 Joint top weight Santini will not run in the Grand National at Aintree on 10 April, says trainer Nicky Henderson.

The 2020 Gold Cup runner-up was pulled up in this year’s race at Cheltenham.

Stablemates Beware the Bear and Pym will also miss the National, with Henderson hoping OK Corral – to be ridden by Derek O’Connor – can land his first victory in the race.

Minella Times is now guaranteed a place in the field, and is set to be ridden by Rachael Blackmore if he runs at Aintree rather than Monday’s Irish National.

Blackmore, who was the first woman to be leading jockey at last month’s Cheltenham Festival, could ride Balko Des Flos in the Grand National if Minella Times goes to Fairyhouse instead.

Minella Times, trained by Henry de Bromhead, was a 50-1 outsider for the National in February, but is now down to 12-1 with punters latching on to Blackmore’s success.

Cloth Cap, trained by Jonjo O’Neill, is 4-1 favorite to give owner Trevor Hemmings a record fourth triumph in the Grand National.