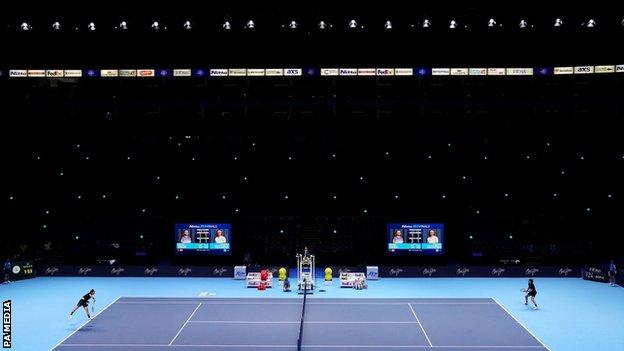 Rafael Nadal began his bid for the biggest title missing from his vast collection with an ATP Finals win over Russian debutant Andrey Rublev.

Spanish second seed Nadal, 34, won 6-3 6-4 as the season-ending event began in London for the final time.

Nadal’s straight-set success moved him above the Austrian at the top of Group London 2020 – named in tribute to the event’s 50th anniversary – after the opening matches.

Seeing off in-form Rublev – who has won more matches and more titles than anyone else on the ATP Tour this year – was the perfect start for Nadal.

“I am very pleased with the victory, it changes the perspective of the tournament a little bit,” said Nadal, who lost in the 2010 and 2013 finals.

“I know I have a super difficult match against Dominic but a win in two sets helps for the confidence.”

Only one of the left-hander’s 86 career titles has come on an indoor hard court, but he shifted up a gear from his displays in similar conditions at this month’s Paris Masters – where he lost in the semi-finals – to frustrate Rublev.

Eighth seed Rublev struggled on serve in the first set – admitting it was a sign of nerves on his Finals debut – and was punished when Nadal earned the decisive break for a 4-2 lead, which he did not relinquish.

Rublev showed his annoyance at his performance by thumping his racquet against the court and more woe came the 23-year-old’s way when Nadal broke in the opening game of the second set.

“When he broke me in the second set I started to relax but by then it was too late,” Rublev said.

From that point, it seemed almost inevitable the 20-time Grand Slam champion would wrap up a straight-set win and duly did without even facing a break point.

“My serve worked really well, that always helps on this surface and I had a few chances on the return, which I converted,” added Nadal, who won 81% of his service points and converted two of five break points.

When Tsitsipas and Thiem met in last year’s final, Tsitsipas celebrated winning the biggest title of his career with a large contingent of boisterous Greek fans inside an atmospheric O2 Arena.

Twelve months on, the re-run of that memorable match could not have been played in more contrasting circumstances.

No fans are allowed inside the near 18,000-seater arena because of coronavirus restrictions, meaning London cannot bid farewell to the tournament as it would have wished before it moves to Turin, Italy, next year.

Without the spectators, there was an eerie atmosphere as only the players, officials, ball kids and journalists were allowed inside the dark arena.

Asked what was the main difference for him between the two matches, Tsitsipas sighed and said: “People in the stands.”

Initially, the lack of atmosphere did not dilute the level of each player’s intensity in a tight opening set.

Both men found their rhythm from the start in strong service games, leading to a tie-break which Thiem nicked after fighting back from 5-3 down with four successive points.

Sixth seed Tsitsipas had not earned a break point in the opener, but decisively took his chance in the third game of the second set and went on to level the match.

Like their meeting 12 months ago, it teed up another deciding set but this time it was Thiem who took control.

The Austrian ramped up his level to move 3-0 in front and, after fighting off a break point and coming through six deuces to hold in the fifth game, sealed what could be a crucial win to his hopes of reaching the semi-finals.

“You cannot have any slow starts here,” said Thiem, who hit 11 winners in a dominant third set.

“I have experienced in the past four years how important it is to have a fast start and I’m happy I did it.”

Before the opening singles match, Novak Djokovic was presented with the trophy for finishing as the year-end world number one on the ATP Tour.

The 33-year-old Serb has finished the year as the top-ranked player for a sixth time, equalling the record set by American great Pete Sampras.

“It is very fulfilling and I am proud. I am overwhelmed with happy emotions,” said Djokovic on matching the feat of his childhood idol.

Djokovic’s biggest victory of the year came when he won his 17th Grand Slam at the Australian Open in January and he goes into the ATP Finals having lost just three of his 42 matches in 2020.

Man Utd’s Lindelof on why he’s called ‘The Iceman’