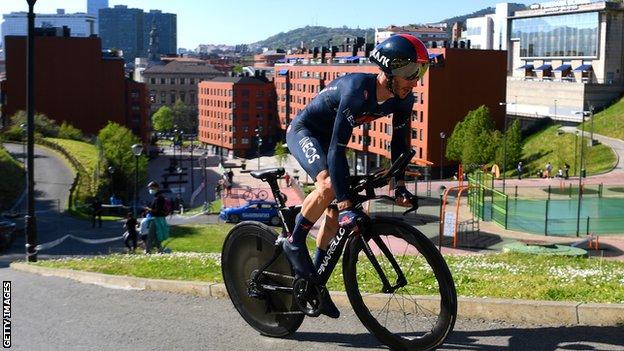 Jumbo-Visma’s Roglic finished 28 seconds ahead of Ineos Grenadiers’ Yates after the 14km stage in Bilbao.

Hugh Carty of EF Education-Nippo was one minute six seconds down, with Yates’ British team-mate Tao Geoghegan Hart a further two seconds back.

Last year’s Giro d’Italia winner Geoghegan Hart was the first of the main British contenders to take on the challenging course in glorious sunshine in northern Spain.

But it was in-form Yates – winner of last month’s Volta a Catalunya – who more effectively tackled the largely high-speed downhill course into the city, which was bookended by two technical climbs.

As Ineos dominated the race in Catalunya, taking the top three places in the general classification, it was Jumbo-Visma who are showing immense strength here, with Roglic first and the in-form Jonas Vingegaard of Denmark third, with Norway’s Tobias Foss fourth.

Tuesday’s second stage is a hilly 155km run from Zalla to Sestao.