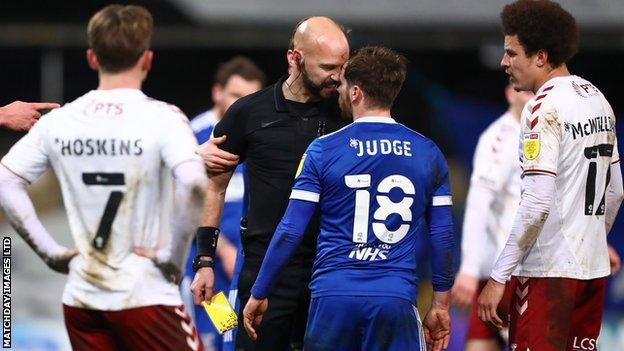 In a statement by the Professional Game Match Officials Limited (PGMOL), the 49-year-old Drysdale said he “did not maintain his composure”.

The Lincolnshire official moved his head towards Judge late in the game and briefly appeared to square up to him.

“I can only apologize to Alan and Ipswich Town,” Drysdale said.

“I fully understand it is important for us as referees to maintain our composure throughout the game and always engage with players in a professional manner.

As well as booking judge for simulation as players from both sides pulled him away, Drysdale then sent off Ipswich midfielder Flynn Downes for using offensive language a couple of minutes later.

Ipswich manager Paul Lambert felt it was “a watered-down apology”.

“By Darren’s own admission, he said he was not in control.”

Lambert has also asked the EFL to investigate the confrontation in Tuesday’s League One fixture.

“I spoke to (EFL head of referees) Mike Jones this morning,” Lambert confirmed. “He found the whole thing a bit disheartening towards his referees.”

“If Alan Judge had behaved in the same way towards the referee, he’d probably be looking at a six-month ban.

“I asked the referee after the game, ‘did you put your head on my player?’ and he told me where to go basically.

“I told him, ‘if you did and footage proves so, you’re in big trouble’. I think it’s unacceptable.

“I look at it that’s it’s a referee’s job to cope with the pressure. You have to go into that environment and be able to handle that.

PGMOL confirmed the incident is being investigated by the Football Association.

“In line with their usual disciplinary process, it would not be appropriate to make any further comments,” a PGMOL spokesperson said.