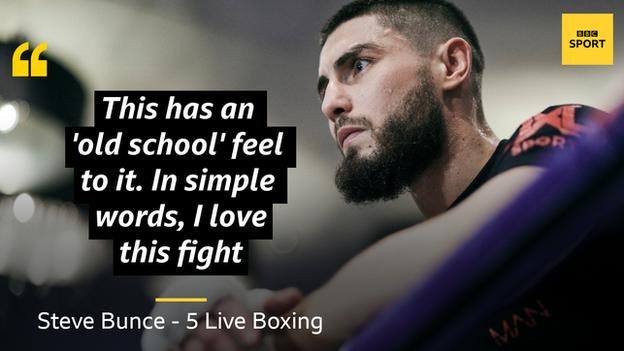 Punches have already been thrown in the fight bubble long before the bell rings for Josh Kelly’s fight with David Avanesyan at Wembley Arena on Saturday night.

The bout – for Russian Avanesyan’s European welterweight title – has been called off multiple times since being first slated to take place in 2018.

The decision by Britain’s Kelly to withdraw on the morning of their original planned date prompted accusations, criticism and a general sense of dislike between the camps.

“This is genuine and goes all the way back to the first of four dates that were in place for this fight,” said Mike Costello, who will commentate on the bout on BBC Radio 5 Live from 22:00 GMT on Saturday.

“In the fight bubble on Wednesday we watched the various camps going through their motions for media workouts and the last one was Kelly, who did a 15-minute workout. Adam Booth, who trains Kelly, asked everybody to leave and that they finish behind closed doors.

“At this stage Neil Marsh – Avanesyan’s manager – arrived in the hotel and as he was shown into the gym, Kelly was still going through a workout. I’m told words were exchanged and I’m reliably informed at least one punch was thrown. So the friction there since 2018 re-surfaced. “

Kelly, who boxed for Team GB at the 2016 Olympics, insists he was “shivering” and unwell 24 hours before his initial fight date and that the move to pull out left him “crying, upset and distraught with myself”.

Avanesyan’s team has been heavily critical of the Sunderland-born fighter and Kelly considers: “I was young in the head, mind and body. I took a lot of flak, mental flak. To get through that has matured me massively. I feel like a man now. It’s three years on, I’ve got two kids, a family to provide for, I’ve got goals for the future and my priorities in place.

“The little things that go wrong are the making of you.”

“It’s possibly one of the hardest fights an 11-fight professional is going to take on paper. But for me, knowing what I’ve got, I believe it will be a fight I can enjoy and get my teeth into.”

Kelly, viewed as one of the hottest prospects in British boxing, boasts a slick, elusive and eye-catching style, and starts a narrow favorite with bookmakers. The 26-year-old has not fought since 2019 but has a professional record of 10 wins and one draw.

Avanesyan, 32, won respect in the UK after sparring work with Chris Eubank Jr and Kell Brook, and has 26 wins from 30 bouts.

Predictions – ‘I love this fight’

Adam Booth has described Kelly as “a worrier who becomes a warrior”. That for me is the potential almost for an upset as the mind has to be absolutely right on the night for him to perform in the way that so many of the stories from the gym suggest he can.

I am just leaning towards the class and size of Kelly to come through.

I have been drifting back to the 1970s and 1980s when European title fights meant something. This one means something, it has that old school feel to it. In simple words, I love this fight.

I think I am leaning to Kelly. I have a feeling Kelly and Booth may have concocted something where they have a go early on.

Current and Former Rajasthan MLAs, Their Kin to Get Covid Vaccine from Tomorrow