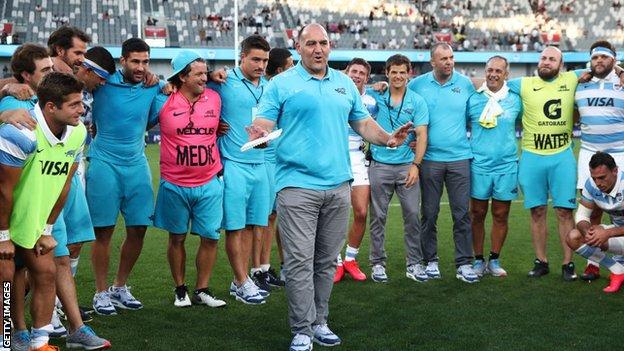 “We have been through hell and the boys just kept ticking. Just so proud of them.”

The match is Argentina’s first since last year’s Rugby World Cup, more than 13 months ago, with their previous fixtures cancelled by the coronavirus pandemic.

“Just staying positive with everything that is going on, which in itself is already a lot,” added Ledesma.

“And then coming out here and playing the game that they played, it is just incredible.”

Argentina captain Pablo Matera, who played for Leicester for a season in 2013, was instrumental in victory.

The 27-year-old believes that the addition of former Australia and Leinster coach Michael Cheika in the team’s backroom staff helped inspire the Pumas.

“I think that made us believe a lot more in ourselves.”

Cheika was hired as an “external advisor” in September with the Rugby Championship in mind.

The closest Argentina had come to defeating the All Blacks before was a 21-21 draw in 1985, although they lost by only four points in their last encounter in July 2019.

New Zealand, who lost 24-22 to Australia last week in Brisbane, have been beaten in two consecutive Test matches for the first time since August 2011.

The defeat drops New Zealand to third in the world rankings, behind South Africa and England, the lowest they have been since 2003.

“We prepared well, but were met by a team that had too much passion for us and we have got to sort that out,” said New Zealand coach Ian Foster.

Foster has won only two of his five games in charge since taking over from Steve Hansen at the end of the Rugby World Cup.

“This role always comes with pressure and what I feel now is massive disappointment that I haven’t achieved what I wanted to achieve in the last two games,” Foster said.

“We have a lot of good people in this group and we have shown we can perform at a high level and we need to go back and show we can do it again.”