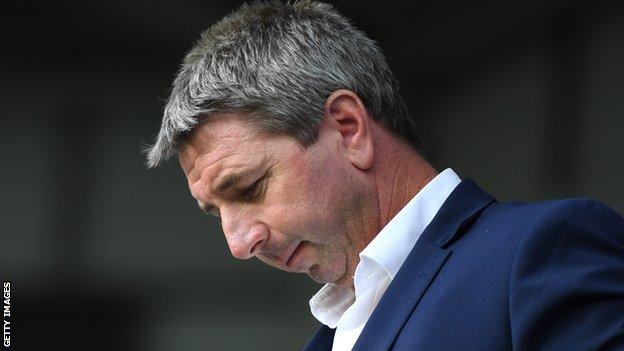 Warrington Wolves head coach Steve Price will leave his position at the end of the 2021 season.

The Australian, whose contract expires at the end of the year, will remain in charge of the first team for the upcoming campaign.

He will then return home to Australia with his wife and three daughters.

Price joined the club in 2018 and reached two major finals that year, before leading Wolves to Challenge Cup success against St Helens in 2019.

He has overseen finishes of fourth, fourth and third in Super League, reaching the Grand Final in his first season before losing to Wigan.

But the last two campaigns have seen Wire go out at the first elimination stage of the play-offs, losing at home to Castleford in 2019 and Hull FC in 2020.

‘Bow out in the right manner’

“Warrington Wolves is a wonderful club and one that I am hugely proud to be able to represent,” Price said. “I cannot thank everyone enough for the opportunity given to me.”

“It has been a huge decision but after speaking at length with my wife and daughters, we all feel that it will be the right time to return home once my current contract expires at the end of the forthcoming season.

“In the meantime, I remain wholly committed to the club and getting the absolute best out of our playing group throughout 2021 to leave Warrington Wolves in a powerful position both on and off the field.

“After speaking with the board, my coaching staff and the players, we felt that it was best to be honest and open with this news before the season commences, leaving us free to focus on the task in hand.”

Warrington chairman Stuart Middleton thanked Price for all his hard work and said he would move on with the club’s best wishes.

“A highlight of Steve’s tenure was lifting the Challenge Cup in 2019 and I know he is committed to replicating this success in the Super League for 2021,” he added.

“He knows he has got an important job to do this year and wants to bow out in the right manner.

“We will now commence a thorough process to ensure we bring in the right person to take the club forward in 2022 and beyond.”