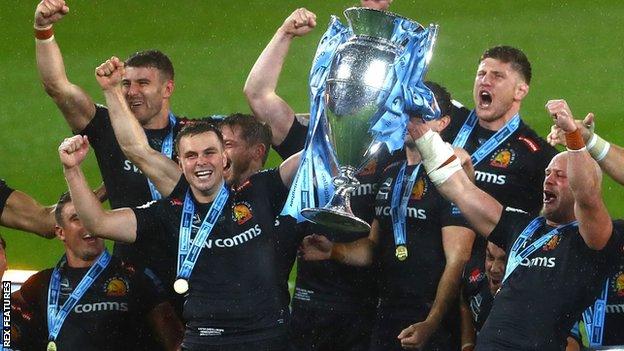 As with last season’s restart, matches will continue to be played behind closed doors for the foreseeable future while a sizable club of the English game will also be missing from the top flight.

Exeter have barely had time to finish drinking the champagne out of the trophy they regained by beating Wasps in last month’s Twickenham final, but will help get the ball rolling again across the road at the Stoop on Friday against Harlequins.

BBC Sport builds up to that fixture and also takes you through some of the plotlines to look out for this season.

With less than four weeks to bathe in the glory of their historic domestic and European double, Exeter return to south west London to start their quest for back-to-back premiership titles.

Chiefs director of rugby Rob Baxter spoke in the immediate aftermath of that rain-soaked Twickenham final about the challenge of starting to build a dynasty.

But his focus was also almost immediately on how to beat Harlequins on Friday. Rather than complaining about having to start the new campaign shortly after finishing the previous one, Baxter is emphasizing the positives.

“There is another way of looking at it,” he told BBC Sport. “It’s also the shortest season these lads will ever play in the Premiership.”

“They’ve got the opportunity to win something or have a good season based on a schedule that’s two months shorter than any other season.

“Yes, we’re going to run straight into the Lions tour, but that’s the world we’re in at the moment.

“We’ve had to adapt and had to get on with things, and it’ll be just like last season. The team that adapts the quickest and gets on with things and doesn’t look for excuses will thrive in this environment.”

Jack Nowell, Stuart Hogg, Jonny Hill and Henry Slade will be unavailable for the opening rounds through a combination of injury and international duty, but the Devonians should still possess plenty of depth to start as title favorites.

Joe Simmonds was the iceman off the tee at fly-half as he kicked vital penalties at crucial moments of both the European Champions Cup and Premiership finals.

While only having a couple of weeks to take stock and look back at those celebrations, the 23-year-old is already relishing the new season.

“We have an advantage on other teams,” Simmonds said. “We only played three-or-so weeks ago, whereas other teams have just been training.

“For us, it’s not worrying about making sure we’re ready for the game because we’re pretty much match fit already.

“It’s exciting times for us and we’re all excited to get stuck in.”

Can anyone catch Exeter?

While Chiefs will start the campaign as undoubtedly favorites, will anyone be able to keep up with their relentless form?

Wasps, Bristol and Bath completed the top four line-up last season and should fancy their chances of repeating that achievement.

Sale would most likely have joined them in those play-offs had 27 positive coronavirus cases within the club not forced them to forfeit their final match of the season.

The Sharks have since been cleared of any wrongdoing The following is an RFU and Public Health England North West investigation.

Steve Diamond is planning on adding new names to the squad in Greater Manchester imminently, with center Manu Tuilagi and lock Lood de Jager injured, and believes Exeter can be caught by others.

“We’ve got to have our own expression and our own style and we’ve got very good players,” the Sale director of rugby said.

“I don’t think we’ve got the same sort of squad as Exeter but if we keep focusing on ourselves, we’ll keep heading in the right direction and who knows when you get to the play-offs?”

“We’re all on the same page and let’s just crack on with this season and see where we go.”

Two of last season’s semi-finalists, Wasps and Bristol, meet again in the opening round on Sunday.

Bristol showed signs of shaping the dynasty they are hoping to build at Ashton Gate when they won the European Challenge Cup final against Toulon last month.

Pat Lam’s side will once again possess some skilful ball-players and experienced campaigners.

They will be without Fiji powerhouse back Semi Radradra, fly-half Callum Sheedy, and forwards Kyle Sinckler and Ben Earl while the Autumn Nations Cup continues, but the bears have more than shown their impressive depth in the past two seasons.

Wasps will hope to carry on the momentum that took them within a well-executed line-out of the title.

Lee Blackett’s appointment as head coach in February coincided with an impressive run of form both before and after the season restart. Blackett and his assistants have extended their contracts on the eve of the new season.

But they will be without scrum-half Dan Robson and lock Joe Launchbury for the early rounds as they hope to continue pressing their prospective England careers.

The return of players including Brad Shields, Kieran Brookes, Simon McIntyre, Alfie Barbeary and Malakai Fekitoa, who all missed the final through a combination of Covid-19 protocols and injury, should help mitigate that.

Will Saracens be missed?

One familiar name missing from the title race this season will be Saracens, following their relegation for persistent breaches of the salary cap.

While some of their players will continue to be selected by England, a few others will not feature in the top flight this season as they wait for their Championship campaign to begin, currently scheduled for January.

It will be a Premiership season without names including England captain Owen Farrell, Maro Itoje, the Vunipola brothers, Elliot Daly and Jamie George.

Some players, however, are continuing loan spells at other Premiership clubs: Back Row Ben Earl and full-back Max Malins at Bristol, second row Nick Isiekwe at Northampton and hooker Jack Singleton at Gloucester.

But as the competition continues to mitigate financial losses from no crowds being allowed into matches, how much of a marketing drain will the absence of some of the country’s biggest personalities in the men’s game prove?

Leicester and London Irish finished 11th and 10th respectively last season and will most likely find themselves once again in the relegation scrap.

Uncertainty behind the scenes has continued in the off-season at Tigers after director of rugby Geordan Murphy departed the club on Friday, bringing a 23-year association as both player and coach at Welford Road to a sudden end.

Former England assistant coach Steve Borthwick will assume control of first-team affairs as head coach, with Tigers starting the campaign without a number of internationals at the Autumn Nations Cup.

For Irish, this season marks a long-awaited return to playing home matches in London.

The Exiles take up tenancy at Brentford’s Community Stadium after 20 years at Reading’s Madejski Stadium and, after years of preparation, their first match in West London against Leicester will sadly take place without fans.

Declan Kidney’s side begin their campaign against arguably some of their closest rivals in the relegation mix, travelling to Worcester on Saturday before facing Tigers at home the following weekend.