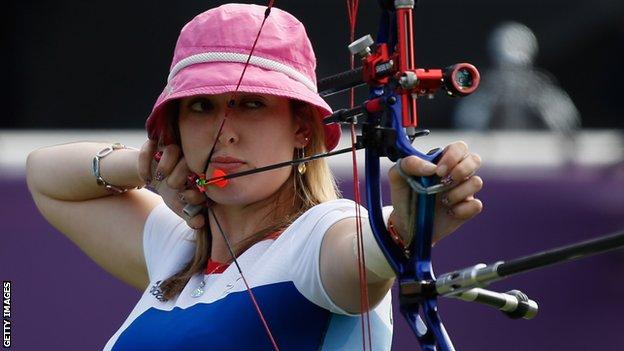 Two-time Paralympic archery champion Danielle Brown believes that the Games are becoming an exclusive rather than an inclusive event.

Brown won gold at Beijing 2008 and London 2012 but in 2013 was told that her condition – complex regional pain syndrome – made her ineligible to compete.

“I was a disabled person but not disabled enough,” she told BBC Sport.

“London did some amazing things for the Paralympic movement and broke down so many walls but I also think it built up other walls.”

With six months to go to the start of the rearranged Tokyo Paralympics on 24 August, classification and eligibility issues are an increasing problem for the International Paralympic Committee.

A large number of athletes across a number of sports require either first-time or repeat classification before the Games to ensure they are competing in the right category, but Covid-19 and a lack of international competition means there is a large backlog.

It is a headache for the IPC who had previously stated that it did not want assessments to take place at a Games, but with limited opportunities in the build-up, it may be left with little choice.

In addition, controversy over the eligibility of wheelchair basketball players, including Great Britain’s George Bates, who has the same condition as Brown, is ongoing with all players going to Tokyo required to pass assessments before the sport could take its place at the Games.

It led to David Eng, a two-time Paralympic champion in the sport and Team Canada flagbearer at the 2016 opening ceremony, being confirmed out of the sport.

“Inclusion is something that is important and anyone should be able to access sport, but I don’t think we have it right at that competitive level,” said Brown.

“But there is no quick fix. You want the playing field to be level, but you can’t have a million categories, so a line needs to be drawn somewhere but where it is at the moment is far too arbitrary.”

Who misses out on the Paralympics?

According to figures from the Activity Alliance charity, one in five people in England have an impairment but a large proportion of those – somewhere in the region of 70% – would not be eligible for Paralympic competition.

For a Paralympic classification, you need to have an impairment which is permanent, but there are also many permanent impairments which do not fit the parameters – conditions including ME, arthritis and mental health issues, plus deafness and hearing loss.

For athletes who are deaf and hearing-impaired, they can take part in the Deaflympics, which has been staged since 1924, with competitors required to have a hearing loss of at least 55 decibels in their better ear.

While there is resistance in some parts of the deaf community to closer integration with the Paralympics, with many deaf people not seeing themselves as disabled, UK Deaf Sport executive director Valerie Copenhagen believes that conversations need to take place to try to help increase awareness of deaf sport and athletes, while also retaining their own identity.

“I’m not sure the Deaflympics will ever reach the same level of awareness and success as the Paralympics,” she told BBC Sport

“If some deaf athletes were to compete at the Paralympics, it would mean we would be part of a bigger movement and with that comes greater exposure and funding.

“The deaf sport movement has been incredible but there is something about opening those doors and having those conversations about what is right for our athletes.”

“What do we want the long-term future to look like for our deaf athletes? If that means the chance to compete in the Paralympic arena then why don’t we have the conversation? But there is a balance to be struck.”