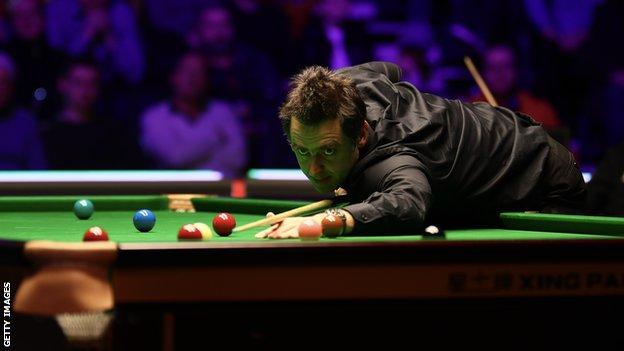 Ronnie O’Sullivan is through to the final of the Welsh Open after defeating Mark Williams 6-1 in Saturday’s evening session in Newport.

It will be the sixth Welsh Open final for O’Sullivan as he looks to equal John Higgin’s record of five titles.

Williams’ run is the best result for a Welshman since Michael White reached the quarter-finals in 2016.

O’Sullivan will face Jordan Brown, who beat Stephen Maguire 6-1 in his semi-final earlier on Saturday.

Williams won the opening frame with a break of 73, but the Englishman soon leveled the match with a 102 break of his own to win the second frame.

The third was played at a slower pace but a determined O’Sullivan made another 77 break to take the frame.

The six-time world champion continued strongly and took a 3–1 lead at the mid-session interval after a 54 break in the fourth.

O’Sullivan continued his dominant display to win the fifth frame, the longest in the match at more than 20 minutes, which at times it looked almost impossible to win with the balls stuck in the bottom left corner of the table.

Williams came back and had a chance in the sixth but a near miss on the brown ball in the top left pocket gave O’Sullivan the chance to pot the blue he needed to win his fifth successive frame.

O’Sullivan sealed victory in the seventh frame to book his place in Sunday’s final.

Northern Ireland’s Brown, who has never gone beyond a ranking tournament quarter-final before this week, dominated from the off against the Scotsman, making a 135 break in the opening frame.

“All the hard work and dedication is finally paying off,” the world number 81 said.

“Three years ago I was working in a petrol station serving customers getting up at half five, half six every morning.

“It’s crazy to think since then the journey that I’ve had and being in a ranking tournament final is just incredible.”