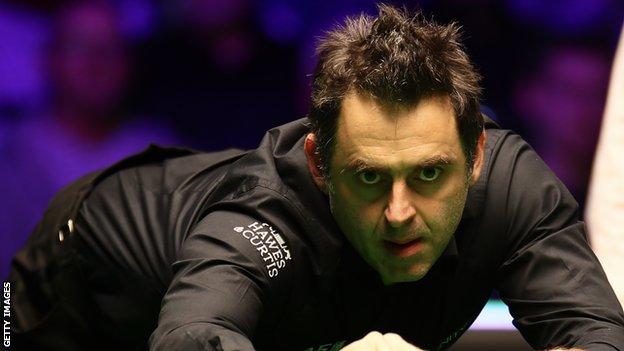 Ronnie O’Sullivan reached the second round of the Players Championship in Milton Keynes with a 6-5 victory against Ding Junhui.

O’Sullivan had established a 5-3 advantage at the Marshall Arena before Ding forced him into a deciding frame.

A break of 95 sealed victory and set up a meeting with fellow Englishman Jack Lisowski, who beat compatriot Martin Gould 6-3.

O’Sullivan suffered a shock defeat in the Welsh Open final on Sunday, as world number 81 Jordan Brown denied him a record-equalling fifth title in the final frame.

The six-time world champion launched a stunning comeback from 5-3 down to beat China’s Ding 6-5 in the first round at the Masters in January.

O’Sullivan trailed twice on Tuesday after losing the first and third frames, but then edged in front.

A break of 103 brought him within a frame of victory at 5-3, before Ding fought back – and O’Sullivan got frustrated, throwing his rest on the floor after missing a chance to win the match 6-4.

But after Ding then won the 10th frame to level the match, a final 95 break sealed O’Sullivan’s progress to the last eight.

“I was just frustrated,” said O’Sullivan. “I couldn’t get to grips with my game and no matter how philosophical you can be, when you’re not striking the ball as great as you want, it can be frustrating.”