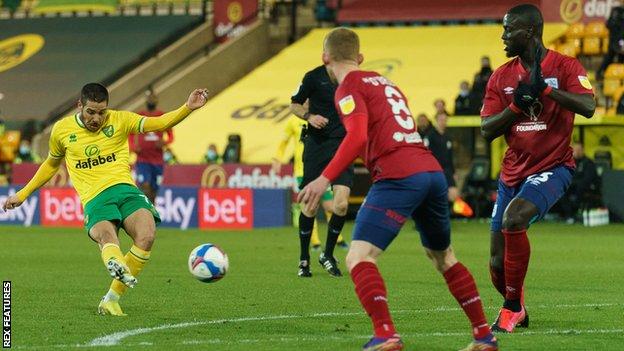 Championship leaders Norwich City moved to within five points of securing an immediate return to the Premier League as they demolished Huddersfield Town in a brilliant display.

Huddersfield were blown away as their five-match unbeaten run came to a spectacular end.

Demeaco Duhaney went closest to considering a consolation with a header against the post while Danny Ward was denied on the rebound by Tim Krul.

Having been frustrated in back-to-back draws against Blackburn and Preston, Norwich returned to winning ways in emphatic style to extend their unbeaten run to 12 games and move 17 points clear of third-placed Brentford.

After finishing bottom of the Premier League last season, the Canaries could seal promotion back to the top flight as early as Saturday should results elsewhere go their way.

Despite recording their biggest league win in almost 70 years, Norwich could have won by even more, such was the nature of their dominance.

Finland striker Pukki took his season’s tally to 25 league goals as he first tucked in from close range after Cantwell had weaved his way into the Huddersfield box from the left to square to him unmarked.

His second was a great piece of understanding with Buendia, who played a measured ball from inside his own half behind the Huddersfield defense for Pukki to run on to and smash in off the inside of the post.

The hat-trick was completed just past the hour as he converted a penalty after Oliver Skipp’s solo run into the area was ended by Isaac Mbenza’s trip.

Pukki also showed he could be a provider as well as scorer as his nearest challenger for the club’s golden boot this season, Buendia benefited from his vision to net Norwich’s third and his 12th of the campaign with an unstoppable drive into the bottom left corner.

Buendia then provided the final balls for Cantwell to make it 4-0 inside the opening half an hour with another powerful shot from the edge of the area before a brilliant one-two with Dowell set up their fifth just before the break.

Not to be outdone, full-back Max Aarons also produced one of the assists of the night as his pinpoint low cross laid on the seventh and final goal for substitute Hugill to fire into the roof of the net with his very first touch.

For Huddersfield, this defeat was a stark reminder that they remain in a scrap for survival.

They have only won twice since the turn of the year and looked completely devoid of ideas how to contain their Premier League-bound opponents.

The margin of defeat meant they dropped a place to 19th as their goal difference took a severe dent and moved them below Derby County, eight points above the drop zone.

They face fellow strugglers Rotherham United next on Saturday, who are third from bottom and have three games in hand on Huddersfield.

“It was a brilliant performance from the lads, not only what we did in possession but also the intensity off the ball in terms of pressing.

“All round, it was pretty outstanding and I can’t complain too much.

“It was important we kept going tonight even after half-time, I didn’t want to allow them any chance to get back into it and I wanted to score as many goals as possible.

“Everyone stayed focused and focused right until the last second, but I would’ve also taken a dirty 1-0 tonight as I know how difficult it is to win games at this level.”

“I’m not too addicted to the table, I just want us to go out and keep winning football matches and that’s certainly going to be the attitude in the coming weeks.”

“I need to say sorry to all of our fans. I can understand the feelings they have and they don’t feel today that we performed in the right way.”

“It was clear we did not play well, we did not control any moment of the game and Norwich were better than us in all areas of the game.

“We didn’t make any fans proud today and that is one of the worst feelings you can have as a player or coach.

“I have to analyze why this happened. The consequences have to come directly to me, I decided who played, the style we were trying to play so I have to be the first one to face those questions.

“But I am determined to continue facing the battle we’re in right now.”