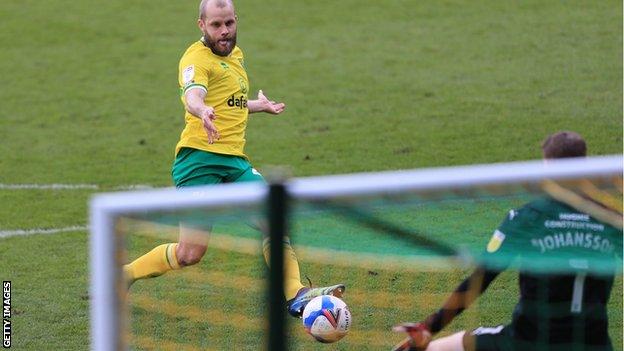 Teemu Pukki’s 15th goal of the season saw Norwich beat a spirited Rotherham side to go seven points clear at the top of the Championship.

The Finland striker ran through after a clever dummy from Todd Cantwell to slot under the excellent millers goalkeeper Viktor Johansson and score the only goal in a game full of chances.

Lewis Wing struck the post direct from a corner and Clark Robertson had a goal disallowed as the visitors threatened before falling behind, though the Canaries sliced ​​them open on numerous occasions thanks to free-flowing play between Emi Buendia, Cantwell and Pukki.

Rotherham made the leaders sweat for their victory, Ben Wiles smashing a second-half volley against the bar and Ben Crooks’ strike kept out by a last-ditch Max Aarons block, but Norwich held firm and could have won by more.

Defeats for Brentford, in second, and fourth-placed Swansea mean Daniel Farke’s side further extend their cushion, while their South Yorkshire opponents slip into the relegation zone after Birmingham’s victory at Sheffield Wednesday.

Norwich looked like scoring every time they attacked in the first half, Mario Vrancic side-footing wide, Cantwell slicing over and Argentine playmaker Buendia seeing his effort cleared off the line by Robertson.

But the millers – managed by boyhood canaries fan Paul Warne – hung in there and put pressure on in seven minutes of added time, without creating one big opening.

The hosts are now unbeaten in their past 14 league games at Carrow Road, equalling their streak between August 2009 and January 2010 under Paul Lambert.

Pukki’s goal went down as a Buendia assist, making it a league-high seven goals that they have combined for this season, and the goalscorer came close to a second when his shot from a narrow angle was superbly saved by Johansson and Vrancic put the rebound wide.

Meanwhile, Rotherham are now two points from safety after their third successive defeat and have picked up just one point from their nine Championship games against the current top six.

“I think we were fantastic in the first half. We had so many chances and the game should be buried.

“It’s always the same against Rotherham – if you just score one goal this team is always brave, they play with courage, they go for goals, so you have to punish them.”

“If you want to win something you need to be there with a top-class defense and this is what we deliver at the moment, with many clean sheets.”

“We harshly had a goal supposed off in the first half, we gifted them a goal and the back line looked a bit nervous but we grew into the game.

“Second half we asked them to play with a bit more belief and I think we did – all in all I’m pleased with the performance levels but just disappointed with the result.”