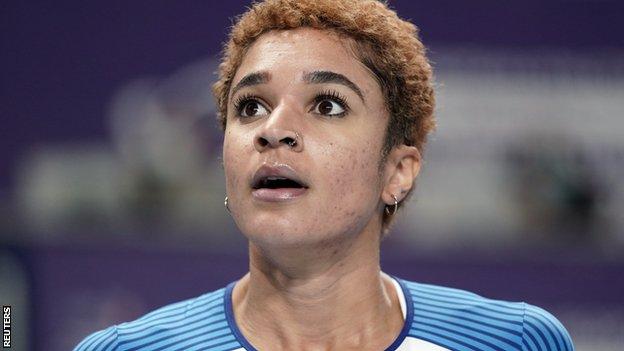 Amy-Eloise Markovc produced a superb sprint finish in the 3,000m final to earn the British team their first gold at the European Indoor Championships.

“It’s a dream come true, to have a flag draped around your shoulders,” Markovc told BBC Sport.

“I knew we were moving at a good pace and knew I could make moves.”

Ockenden’s 8: 46.60 was also a personal best and enough for bronze.

The Dorset-based athlete said: “What an incredible feeling. Competing with each other probably helped us to get to those positions.”

There was controversy in the eagerly anticipated men’s 1500m final with the disqualification of Norway’s precocious talent Jakob Ingebrigtsen, who had crossed the line first.

The 20-year-old outsprinted champion Marcin Lewandowski in the closing stages, but it was later deemed he had stepped off the track during the race as he was jostling for position. The Norwegian team has launched a counter-protest, but as it stands the 33-year-old Pole has won his fourth successive title.

Olympic heptathlon champion Nafi thiam was head and shoulders above the rest of the field as she won the pentathlon with a personal best of 4,904 points. Compatriot Noor Vidts took silver with 4,791 while British debutant Holly Mills was fifth, scoring 4,517.

Team captain Jodie williams will be Great Britain’s only representative in Saturday’s 400m finals after finishing second in her race in a personal-best time of 52.09 seconds.

With only the first two to go through each semi-final, Williams ensured she kept her form over the final 200m to cross the line behind outstanding favorite Femke Bol of the Netherlands.

“Semi-finals are always the hardest round. When you’re in the final you’re clear. I’ll go out there and have a good time.”

Justyna Swiety-Ersetic, a major hope for a home gold medal, won her semi-final in a Polish national record of 51.34 seconds, although that was 0.16 slower than Bol.

Cambridge and Coleridge athlete Holly archer set a personal best of four minutes 9.77 seconds to win her 1500m heat and book a place in Saturday’s final. Katie Snowden came third in her heat to also secure a spot.

Another Wigan athlete, Emily Borthwick, 23, impressed on her senior debut by qualifying for Sunday’s high jump final with a personal best of 1.91m.

Jamie Webb, a strong British medal hope, came second in his 800m heat to advance into Saturday’s semi-finals, while Scot Guy Learmonth cruised to victory in his race.

The 28-year-old, who failed to qualify for the final at Glasgow 2019 after falling in the semi-finals, finished ahead of World Indoor and European outdoor champion Adam Kszczot of Poland.