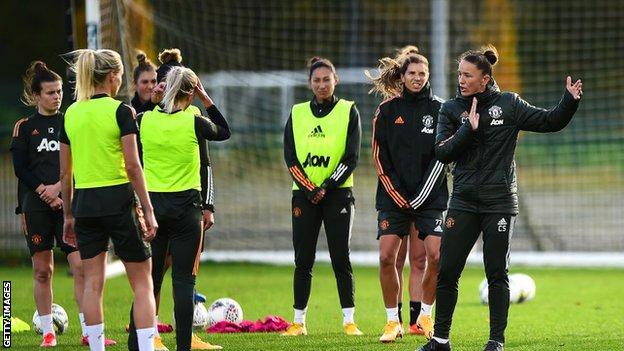 Boss Casey Stoney says Manchester United are “doing things the right way” after criticism of the club forming a women’s team later than their rivals.

The club were without a women’s team for 13 years until 2018, which two-time World Cup winner Megan Rapinoe called “disgraceful”.

United, who won promotion in their first season, are top of the WSL and face Manchester City on Saturday.

“She’s about two years too late for the comments,” said Stoney.

“But people are going to have their say aren’t they? It’s a big club. When you go to Manchester United, you get used to that.

“It wasn’t resourced in terms of staff in at the club beforehand – for it to be able to be done the way it is now – and now I believe we’re in a good place. I think we’re doing things the right way. I’m immensely proud to be part of this football club.”

Manchester City sit five points below United in fifth place, having drawn two and lost one of their opening six games.

‘We want to make sure Manchester is red’

FA Cup winners Manchester City, who also travel to United in the Women’s Continental League Cup next Thursday, won the first WSL derby between the sides in front of a record crowd at Etihad Stadium in September 2019.

Asked whether City go into the match as underdogs, manager Gareth Taylor said: “We’ve been in that position before. Everyone’s opinion will be different on that.

“That’s up to other people to decide. The way I see it, it is a real good opportunity to put three points on the board for ourselves and start to really close in on those top places.”

Manchester United captain Katie Zelem said her side are “over the moon” with their start to the season and have carried “that buzz” from their win over Arsenal.

“We just want to take the good vibes and energy into Saturday. I mean, what bigger game to follow the Arsenal result than a Manchester derby?,” she added.

“We all know how much it means to us, the supporters and our fans – it’s a game that we always want to win. We want to come out top and we want to make sure Manchester is red.”

The best of the stats