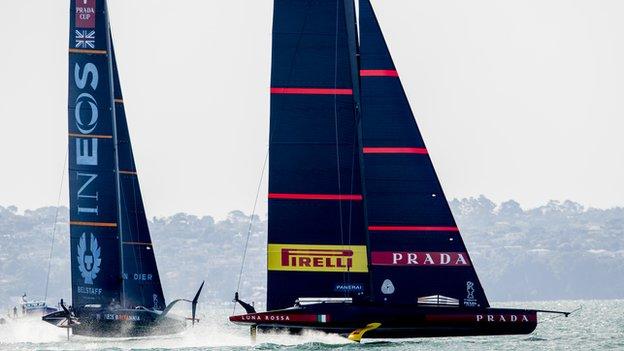 The Italian boat won both of Sunday’s races to set up next month’s contest against holders Team New Zealand for the 36th America’s Cup.

Ineos had entered the Prada Cup series as round-robin winners but found themselves second best.

Luna rossa had led 4-0 when the series was paused last week after Auckland was placed into a 72-hour coronavirus lockdown.

They won the first race when action resumed on Saturday but Ineos gave themselves a glimmer of hope by winning the day’s second race.

But the Italians began Sunday’s races strongly, taking race seven by one minute and 45 seconds.

The British boat won the start of race eight but their rivals’ superior speed saw them take the lead halfway down the first leg before wrapping up the series with a 56-second margin.

It ended hopes of Britain having a first America’s Cup.

“I’ve got to say well done Luna Rossa and well done Italy,” Ainslie said. “I know it’s a big deal in Italy getting into the America’s Cup final.

“We’re obviously disappointed we didn’t get through and we have to go away, go back to the drawing board and see what we can do.”

The best-of-13 America’s Cup will start on 6 March.