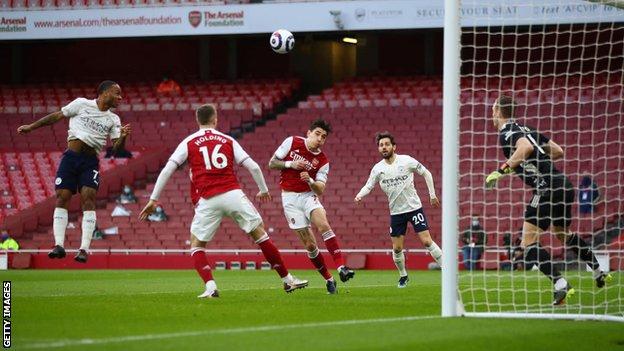 Manchester City extended their winning run to 18 games as they continued their impressive march towards the Premier League title with victory at Arsenal.

The visitors have not dropped a point since 15 December and looked confident right from the outset, taking the lead with just two minutes on the clock as Raheem Sterling somehow managed to outjump Rob Holding to head in Riyad Mahrez’s cross.

City had four shots to Arsenal’s none in the opening quarter of an hour and it looked like the Gunners were in danger of being on the end of a heavy defeat as Pep Guardiola’s side poured forward at every opportunity.

To Arsenal’s credit they weathered that early storm and grew into the game as Kieran Tierney tested Ederson with a strong effort from distance, while there were glimpses of a threat on the break through the pace of Bukayo Saka.

City failed to kick on after the break although still looked the most likely to add to their lead as Kevin de Bruyne – making his first start in over a month – lifted an effort just wide while Ilkay Gundogan saw a shot saved by Bernd Leno before Joao Cancelo clipped a lovely strike inches past the post late on.

In the end, a second goal was not needed as City took the three points that means they remain 10 points clear at the top of the table with 13 games remaining.

Arsenal, meanwhile, are 10th and six points off the top six.

City have been back to their free-scoring best this season and had bagged 18 goals in their six previous Premier League games going into this fixture.

It looked like another high-scoring game was on the cards when they took a very early lead through Sterling, with Guardiola and his former assistant coach Mikel Arteta having barely finished exchanging pleasantries on the touchline when the ball was brought out of the Arsenal net .

But the additional goals failed to materialize as City were uncharacteristically not at their best in the final third, with Gabriel Jesus launching well over on after a quick counter, while Gundogan and De Bruyne could arguably have done better with their opportunities.

While it was a narrow win in the end it was one that never really looked in doubt, with Ederson making just the one save all game.

This was City’s 23rd clean sheet of the season, more than any other team in the top five European leagues or top four divisions in England, while they have not been behind in any of their past 17 Premier League games.

The victory also equaled a club record 11 successive away wins in all competitions. Impressive statistics for City, worrying ones for any side hoping to somehow deny them a third league title in four seasons.

Arsenal had gone into this game having lost their past seven league games versus City, so a victory against Guardiola’s in-form side always looked a tall order.

Their dreadful start when they were completely overpowered by their opponents suggested this was not just going to be another defeat, but also a hefty one.

While Ederson was never really troubled in the city goal, Arsenal had their moments with Saka once again particularly lively.

The 19-year-old’s pace on the counter meant City could never truly relax and perhaps accounted for why the visitors failed to go on and win by a bigger margin.

Saka was lining up on the left, despite having got more goals and assists on the right this season, so could arguably have provided even more of a threat if he’d started this game in that position.

Regardless, while Arteta will be unhappy that his side did not threaten Ederson’s goal more he can be happy that they did not at least crumble after their poor start.

Sterling scores on the road again – the stats

Manchester City switch their attention to the Champions League as they face Borussia Monchengladbach in Budapest in the last 16 on Wednesday, 24 February (20:00 GMT), while Arsenal play Benfica in Athens in the second leg of their Europa League last-32 tie (17:55 GMT).

Rate players out of 10 throughout or after the game. The rater will close 30 minutes after the final whistle.

Rating range key1 = Give it up10 = Pure perfection

Lack of goals has been ‘very tough’ – werner

What happens when the Premier League dream dies?