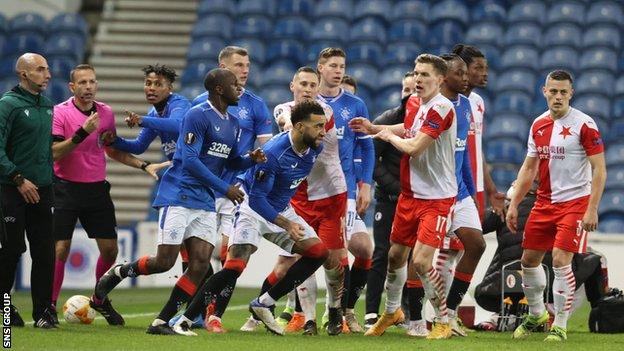 The Czech has been given a provisional suspension for insulting an opponent while Uefa investigate the allegation.

If found guilty of racism, he could face a 10-match ban.

Uefa says it is also investigating Kamara’s behavior. Slavia claim Kudela was assaulted in the tunnel after the match in Glasgow.

It added: “UEFA has carried out an initial investigation which makes damning reading about Kudela’s conduct. This initial one-match ban does little to instil confidence in UEFA being serious about stamping out racism in football and they must take robust action going forward.

“The defense put forward by Slavia Prague can only be described as incredible or fantasy.”

Police Scotland are also looking into separate allegations of racial abuse and a reported assault.

Kudela will miss Thursday’s quarter-final first-leg meeting with Arsenal. However, he was expected to be absent for the game in London anyway, owing to an injury sustained against Wales on duty with the Czech Republic.

A statement from Uefa concludes that more information “will be made available once the CEDB [Control, Ethics and Disciplinary Body] has taken a decision in due course “.