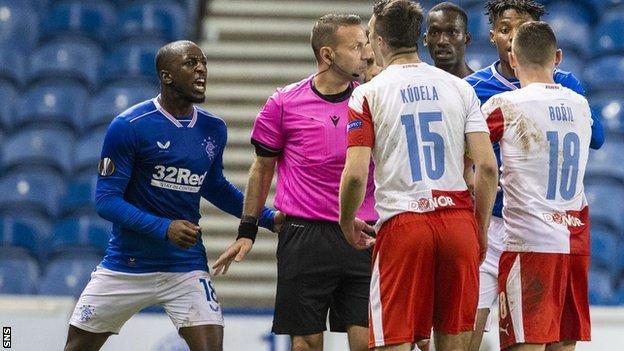 Rangers’ Glen Kamara says he has received racial abuse on social media “every day” since the controversial Europa League game with Slavia Prague.

The midfielder alleged he was racially abused by Slavia’s Ondrej Kudela during the last-16 tie at Ibrox on 18 March.

Kudela, who denies using racist language, has been provisionally banned for one game while Uefa investigates.

“If I could go back to the time of the game I’d walk off the pitch, 100%,” Kamara told ITV News.external-link

“The manager was trying to get me off the pitch but it was like I was on my own and I couldn’t hear anybody.”

“I had a lot of emotions going through my mind. Angry, upset, I felt humiliated.

“All my family, friends, fans, whoever was watching, I was taken back a lot and I felt like a little boy. I was at a point where I was so angry I had tears in my eyes.”

Czech defender Kudela, 34, could face a 10-game suspension if found guilty, while Kamara is also being investigated by Uefa after Slavia accused him of assault in a confrontation after the game, which the visitors won 2-0 to progress 3-1 on aggregate.

Police Scotland are also conducting an investigation of both incidents.

“I’ve seen their [Slavia] fans, how they’ve reacted, and I’ll get [racist] abuse probably every day on my Instagram, “Kamara added.

“Every day, easily – I’m not the one that gets really affected by it, so I’m all right. But how the team has reacted and taken it, it’s sad.

“I feel like I need to tell my story – the online messages I’ve been getting, the racial abuse online – Instagram, Twitter, everywhere else. I feel like as the victim, it needs to be said.”