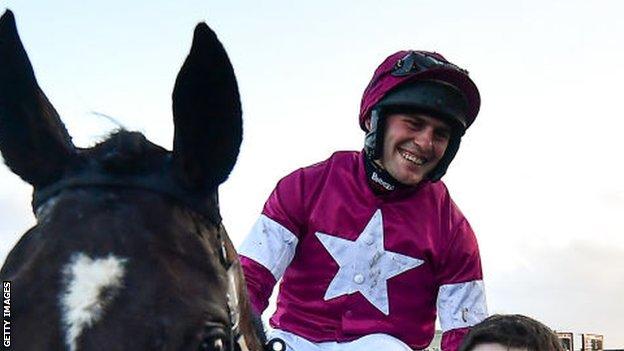 Irish amateur jockey Rob James has been banned for 12 months, with the last eight months suspended, after a video emerged showing him climbing on to the back of a dead horse.

The Irish Horseracing Regulatory Board (IHRB) issued the punishment on Wednesday.

The IHRB found he acted in a manner “prejudicial to the integrity and good reputation of horse racing”.

James issued an apology over the video last week.

“I would just like to apologize for my actions which were wholly inappropriate and disrespectful,” James said.

James, who rode Milan Native to victory for trainer Gordon Elliott at the Cheltenham Festival last year, said the mare in the video died after suffering a cardiac arrest on a gallops in April 2016.

His point-to-point training permit has also been suspended for the same period.

Last week trainer Elliott was banned for a year, six months of which were suspended, after a photo circulated on social media of him sitting on a dead house.