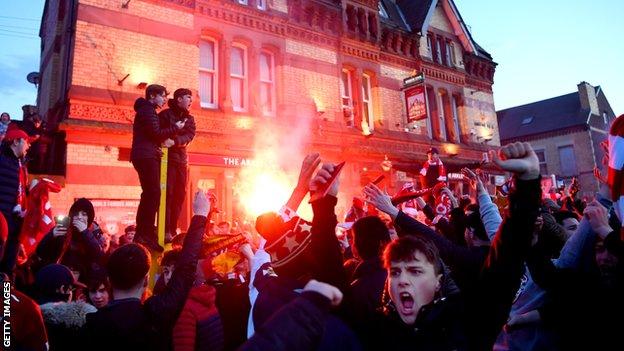 As the ball hits the net, 3,000 Atletico fans erupt and manager Diego Simeone celebrates before them.

But as the lights went out on Liverpool’s Champions League defense so they did on football – Covid-19 shutting the game down for three months and leaving European grounds empty indefinitely.

A subsequent investigation found the game was one of two major sporting events that week, along with the Cheltenham Festival, that ’caused increased suffering and death’

Indeed, by the end of March 2020, Liverpool was a suspected coronavirus ‘hotspot’, with one of the highest suspected number of cases in the UK.

One year on from the last match before a full house, we spoke to those who were inside Anfield to find out what it was like.

When Liverpool lost 1-0 in Madrid on 18 February, with only nine Covid cases confirmed in the UK at the time, there were only hints of the impending tumult.

Liverpool supporter and co-host of podcast The Anfield Wrap John Gibbons was there and says it was no different to usual.

“We treated it like a normal European away game. Everyone was in the bars having a good time.”

For Liverpool’s then first-team physio Chris Rohrbeck, it was a similar story.

“We stayed in a bubble on our visit to Madrid as we usually would for a European game,” he says.

“There was talk of coronavirus but for us at the time, it was something happening in China, far away.”

“When we went to Spain, we had deliberately kept ourselves to ourselves.

“There was a feeling something was going to happen.”

In the background, Covid-19 was spreading rapidly, putting sporting fixtures in Italy behind closed doors or postponing them completely.

The day before the second leg at Anfield, Liverpool manager Jurgen Klopp said “some things are more important than football” and urged players and supporters not to shake hands during the game.

However, Arsenal’s Premier League game against Manchester City, scheduled for that Wednesday, was postponed ‘as a precautionary measure’ after several Gunners players went into self-isolation.

It was clear everything was changing.

By that point, Spain had the sixth highest number of confirmed coronavirus cases in the world – and numbers were rising quickly.

“We wondered if, when we landed, they’d just send us back without getting off the plane,” he says.

“When we arrived, I saw pictures of people buying food and toilet paper – it was like a zombie movie.”

“Liverpool is not a massive city,” says Gibbons. “On European games, visiting fans are in the center all day and make a great atmosphere.

“Atletico fans see some of themselves in us so it’s a good relationship.”

For players, the virus was a talking point but the Liverpool team were trying to focus on the game.

“Everyone was aware of what was going on,” explains Rohrbeck. “But we were behind in the tie and we needed to push it away.

“We had to go by what the politicians were saying.”

“We were so busy preparing that there was no point thinking of anything else.”

Inside Anfield, hand sanitiser had multiplied and Rohrbeck says he was washing his hands more than usual.

“But we didn’t have face masks, there were no guidelines to follow,” he recalled.

At 16:30 though, the World Health Organization labelled the new coronavirus as a pandemic and that made it real for Murray.

“I heard the 5 live news bulletin and it suddenly came closer to home,” he says.

“There we were, expecting 60,000 fans inside Anfield, including 3,000 who’d somehow been allowed to travel from Madrid.

“They came in first as well so when I reported the team news, they were already in the ground.”

Condes had similar thoughts. “When we started broadcasting, I spoke about the Covid situation.

“A rough translation is: ‘Confusing times come. We do not know when we will see a game like this again. So let’s enjoy this, the most important thing among the least important.'”

But for fans, coronavirus was not the main issue.

“It sounds crazy now but all we talked about was that we were losing,” says Gibbons.

“It never crossed my mind not to go.”

“We went for drinks as usual in the unseasonable March sunshine at a local Anfield bar. It’s full of Liverpool memorabilia and there were people singing on the balcony.”

“Our only coronavirus worry then was that we were two wins from the title – what would happen if they canceled football?”

And, as referee Danny Makkelie blew his whistle at 20:00, the action shut out any wider context.

“The atmosphere was up there with the best I experienced at Anfield,” remembers Rohrbeck, who sat on the front row of the Liverpool dugout.

“It was just as loud as the Barcelona semi-final from the season before or the Manchester City quarter-final in 2018. “

“It was business as usual in Anfield,” agrees Murray. “We talked about coronavirus on a few occasions but really it was by-the-by.”

“I was single-minded,” concurs Gibbons. “We wanted to win. Liverpool fans always back the team against anyone in Europe but we were nervous against Atletico.”

In a dramatic period of extra time, Liverpool nudged ahead through Roberto Firmino only for Adrian’s loose clearance to gift Atletico sub Marcos Llorente a vital away goal and he would score again before Morata added gloss.

“Champions League matches are always special but this one felt extra because of the amount of time it might take to enjoy a game on the field again,” says Condes.

For Condes, one fan summed it up by telling him: “If there had to be a last game in the history of football, it was undoubtedly this.”

Post-match press duties were dominated by the game, but Murray recalls questions about the impact of coronavirus.

“We asked the managers,” he remembers. “Klopp simply said ‘I’m not an expert’ and understandably left it at that.”

As the managers digested the result, supporters spilled into the city.

“The attitude in Liverpool is if it looks like they’re going to shut the bars, you go out and make the most of it,” says Gibbons.

“The sensible thinking would be to stay away, but this is not a sensible city.

“I took it relatively easy but my colleagues and friends had a heavy night. The office was quiet the following day.”

For Atletico fans, it was party time.

“When the game finished, we went to the center,” Condes says.

“There were many Spanish fans and journalists there, all really happy.

“I took my food to the hotel but many Spanish fans were out celebrating.”

Liverpool staff arrived at their training ground the following morning, still reflecting on the result.

But there would be no training that day.

“We were called into a meeting led by the gaffer,” says Rohrbeck. “He explained the training ground would be closed for at least two weeks but probably four.

“We were told to go home and isolate.”

Prime Minister Boris Johnson announced a national lockdown on 23 March and Liverpool did not return to Melwood until the middle of May,

Football was shut down across the country, mirroring events across Europe.

“When we got back to Spain, people couldn’t believe that the government had allowed the fans to travel,” says Condes.

For John Murray, football’s end was not something he had prepared for.

“I was still expecting to cover a game that weekend,” he says. “I ended up going to watch Bradford Park Avenue as it felt like this might be the last time I’d watch football.”

“I needed that comfort – nobody knew when it might start up again.”