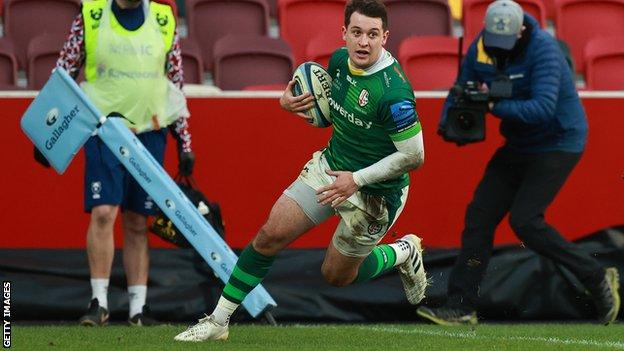 London Irish mounted a second-half fightback to draw with Premiership leaders Bristol Bears as both sides ran in four tries.

Two Siva Naulago efforts and scores from Piers O’Conor and Chris Vui had given the bears a 25-point lead.

But the Exiles replied through Steve Mafi before dominating after the break.

Irish could even have snatched victory in stoppage time, but Parton’s pass inside was knocked on when the hosts had a numerical advantage.

The result moves Bristol three points clear of defending champions Exeter Chiefs at the top of the table, while the Exiles climb two places to seventh.

The match officials had a busy day, with Bristol center Sam Bedlow fortunate to only see yellow for an early tip-tackle on Brophy Clews, who was deemed to have landed on the top of his back.

But, after Jackson’s early penalty for the hosts, the Bears raced into a 14-point lead in Bedlow’s absence courtesy of two interception tries.

Charles Piutau raced away to lay the platform for O’Conor’s opening try and three minutes later Naulago motored the length of the field after picking off Blair Cowan’s pass.

Bristol’s fourth score, which put them 31-6 up, was a brilliant counter-attacking move which Piutau and Naulago worked down the left wing before the Fijian winger finished.

Yet Irish, who struggled with their line-out in the first half, were invigorated by their replacements after the break.

The Exiles had full-back Ben Loader sent to the sin-bin for a deliberate knock-on but the hosts scored through Brophy Clews and Phipps after Bristol number eight Mitch Eadie saw yellow for a shoulder charge at the breakdown.

And Parton capped a good passage of play to complete a remarkable comeback as Irish drew for the second time in the league this season.