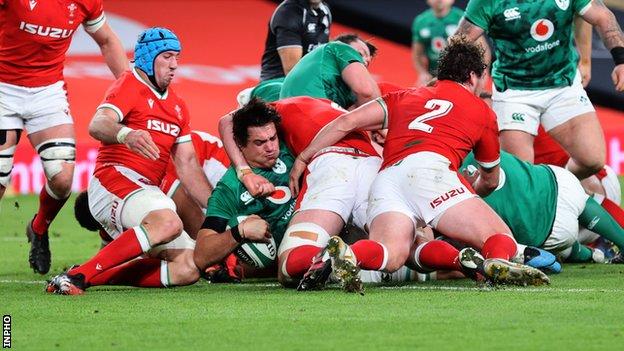 A dominant first half and a late James Lowe try helped the hosts win 32-9 in Dublin with pressure mounting on Wales head coach Wayne Pivac.

Quinn Roux’s try allowed Ireland to build a 10-point half-time lead as the visitors struggled in the set-piece.

Despite a marked improvement after the break, the visitors failed to convert their pressure into points.

The abrupt departure of defence coach Byron Hayward earlier this week increased the scrutiny around a Wales squad coming off the back of a desperately disappointing Six Nations.

While by no means hopelessly disjointed in Dublin, Wales’ performance will have done nothing to ease the concerns of an expectant public.

As for Ireland, who were out to answer their own critics after a comprehensive defeat by France, the bright debut of Lowe and Jamison Gibson-Park’s first start provided reasons for optimism, although they did lose captain Johnny Sexton to a first-half injury.

Andy Farrell’s side face England at Twickenham next week while Wales host Georgia.

Having fallen to disappointing losses on the final day of the Six Nations, both sides attacked the new competition with full intensity as several early flashpoints indicated two sides desperate to provide a performance that would offset recent criticism.

After the opening 40 minutes, it was Ireland who had answered more questions than Wales, whose faltering set-piece and high penalty count put them on the back foot in terms of possession, territory and momentum throughout the half.

Andrew Porter got the better of Rhys Carre to win two penalties in early scrums, but Wales ultimately survived the first surges of Irish pressure because of some excellent try-line defence.

Ireland’s dominance was not reflected on the scoreboard until the 23rd minute when Roux, a late replacement for the unwell Iain Henderson, found enough of a gap to crash over after the hosts worked through the phases on the Welsh line.

All the while, Wales’ set-piece woes continues to blunt any progress, although there was brief respite in the form of a scrum penalty of their own that allowed Halfpenny to slot over three points.

An almighty Irish shove saw another scrum overturned to allow one more period of home pressure before the interval and while Wales would hold out, the introduction of Wyn Jones in place of Carre before the break was evidence of a pack firmly second best throughout the half.

The message delivered to Wales at half-time appeared to strike the right chord as the first 20 minutes after the break gave fuel to hopes of a Welsh comeback.

Pivac’s side became more competitive at the breakdown and found quick tempo with the ball, keeping possession for far longer than they managed in the opening half.

Going into the final quarter the roles had seemingly reversed as Ireland granted Wales opportunities to attack with the penalty count now even.

However, the visitors could not find a way through a miserly Irish defence, who impressively repelled their opponents inside the 22 to emerge from Wales’ purple patch unscathed, barring a single Halfpenny penalty.

In the absence of Sexton, Ulster fly-half Billy Burns, the province’s sole representative in Ireland’s 23 following the late withdrawals of Henderson and Jacob Stockdale (calf), kicked a further two penalties before he was forced from the field.

That left Ireland to see out 15 minutes with scrum-half Conor Murray at 10 but they did so with ease, eating up the clock to dash the last faint hopes of a Welsh comeback.

On his long awaited debut, having reached the three-year residency threshold, Lowe did not disappoint in a busy and physical display.

His try at the end, darting over in the game’s final act, was just reward for a fine performance in which he caused Wales trouble with his kick-chase and his explosive power with ball in hand.

Perhaps even more impressive was the first start of Lowe’s Leinster team-mate Gibson-Park, whose zip at scrum-half gave Ireland consistently quick ball and a tempo that asked questions of the Welsh defence at every phase.

With the trip to Twickenham to come next week, in what is undoubtedly Ireland’s toughest Nations Cup Group B assignment, Gibson-Park’s will be a difficult name to take off the team sheet given his influential bow in international rugby.