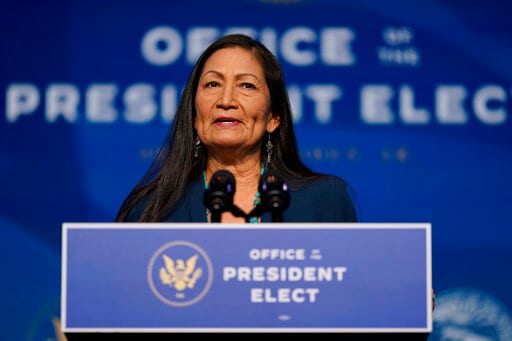 WASHINGTON: Deb Haaland, President Joe Biden’s nominee to head the Interior Department, says oil and natural gas will continue to play a major role in America for years to come, even as she pledged to be a fierce advocate” for public lands and address climate change.

In testimony prepared for her confirmation hearing Tuesday, the New Mexico congresswoman said she is committed to strike the right balance” as the agency manages energy development and seeks to restore and conserve federal lands.

Biden’s agenda, including the possible creation of a Civilian Climate Corps, demonstrates that Americas public lands can and should be engines for clean energy production” and has the potential to spur job creation,” Haaland said, addressing criticism from Republicans who complain that her opposition to drilling on federal lands will cost thousands of jobs and harm economies throughout the West.

Haaland, 60, would be the first Native American to lead a Cabinet agency. The Laguna Pueblo member and two-term congresswoman often draws on her experience as a single mother and the teachings of her ancestors as a reminder that action the U.S. takes on climate change, the environment and sacred sites will affect generations to come.

Native Americans see Haalands nomination as the best chance to move from consultation on tribal issues to consent and to put more land into the hands of tribal nations either outright or through stewardship agreements. The Interior Department has broad oversight of tribal affairs and energy development.

The historic nature of my confirmation is not lost on me, but I will say that it is not about me,” Haaland said in her prepared testimony. Rather, I hope this nomination would be an inspiration for Americans moving forward together as one nation and creating opportunities for all of us.”

As the daughter of a Pueblo woman, Haaland says she learned early to value hard work. Her mother is a Navy veteran and worked for a quarter-century at the Bureau of Indian Education, an Interior Department agency. Her father was a career Marine who served in Vietnam. He received the Silver Star and is buried at Arlington National Cemetery.

As a military family, we moved every few years when I was a kid, but no matter where we lived, my dad taught me and my siblings to appreciate nature, whether on a mountain trail or walking along the beach,” Haaland said.

The future congresswoman spent summers with her grandparents in Mesita, a Laguna Pueblo village. It was in the cornfields with my grandfather where I learned the importance of water and protecting our resources and where I gained a deep respect for the Earth,” she said.

Haaland pledged to lead the Interior Department with honor and integrity and said she will be a fierce advocate for our public lands.

She promised to listen to and work with members of Congress on both sides of the aisle and ensure that the Interior Department’s decisions are based on science. She also vowed to honor the sovereignty of tribal nations and recognize their part in Americas story.”

She said she fully understands the role the Interior Department must play in Biden’s build back better plan for infrastructure and clean energy and said she will seek to protect natural resources for future generations so that we can continue to work, live, hunt, fish, and pray among them.”

Haaland’s nomination has stirred strong opposition from some Republicans who say radical ideas dont fit in with a rural way of life, particularly in the West. They cite her support for the sprawling Green New Deal and Bidens recent moratorium on oil and gas drilling on federal lands which doesnt apply to tribal lands and her opposition to fracking and the Keystone XL oil pipeline.

I have serious concerns with Rep Haalands radical views and support for the Green New Deal, Sen. Steve Daines, R-Mont., tweeted after a meeting with Haaland. Unless my concerns are addressed, I will not only oppose her confirmation for Interior, I will do all I can to defeat it.

Daines is a member of the Senate Energy and Natural Resources Committee, which will consider Haaland’s nomination at a hearing Tuesday. The panel’s chair, Sen. Joe Manchin, D-W.Va., has not said how he will vote on Haaland’s nomination, which Democrats generally support. Manchin, a moderate, said he plans to oppose Biden’s choice for budget director, Neera Tanden, a crucial defection that could sink her nomination in the evenly divided Senate.

“Rep. Haaland is a proven leader and the right person to lead the charge against the existential threats of our time tackling the climate, biodiversity, extinction and COVID-19 crises, and racial justice inequities on our federal public lands and waters,” the groups said.

People’s Welfare My Goal, Nationalism My Religion: UP CM