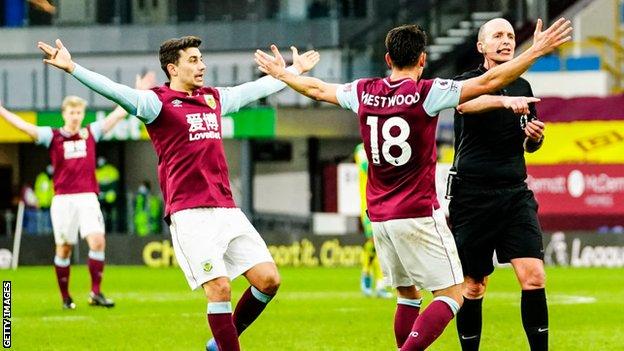 In a month that has included death threats and a club requesting he did not officiate their matches, Mike Dean will surely have been hoping for a quiet afternoon on his return to action at Turf Moor on Saturday.

Referee Dean was a key part of the game’s main moments, sending off West Brom’s Semi Ajayi after 30 minutes and turning down a strong penalty shout in the second half.

Ajayi was shown a straight red after video assistant referee intervention, with the defender adjudged to have denied a goalscoring opportunity when handling the ball on the halfway line.

But VAR controversially did not encourage Dean to consult the pitchside monitor in the 53rd minute when Albion skipper Kyle Bartley appeared to control a Conor Townsend header with an outstretched arm inside his own box.

‘It was a penalty’

The game’s biggest talking point surrounded the decision not to penalize Baggies defender Bartley and award Burnley a penalty.

“That has got to be a penalty,” said BBC Radio 5 Live summarizer Pat Nevin.

“Mike Dean has walked away, he’s not interested – but that is a clear handball to me. Surely they’ve got to have a look at that?”

Former Manchester United striker Dion Dublin was also convinced the Clarets should have been awarded a spot-kick as he watched the game on BBC One’s Final Score.

“I’ve seen the replays a few times,” he added. “You can see it hits Bartley’s right hand below his elbow. It’s a penalty.”

Instead, Michael Oliver – in charge of VAR – did not believe Dean had made a clear and obvious error, and the game continued.

“How does the VAR miss it?” said former Premier League striker Chris Sutton. “They’re supposed to be the safety net!”

“I think they were hoping [this match] would be a nice easy game for Mike Dean.

“Instead there were lots of controversy.”

The other key moment came when Dean did go to the pitchside monitor – and ended up making Ajayi his 111th Premier League dismissal.

Initially, the experienced official waved play on but was instructed to take a second look.

“Everybody will say with todays rules he’s got to send him off,” West Brom boss Sam Allardyce told BBC Sport.

“At the end of the day who knows if it was a goalscoring chance 50 meters from goal? If it’s in the box then fair enough but he was 50 meters out.”

However, most pundits were in agreement that Dean and VAR got it right – and Burnley boss Sean Dyche had no complaints.

“I thought he [Dean] had a really good game, “said Dyche.

Dean has become a magnet for headlines in recent years but even by his standards February has been a notable month.

On 3 February Southampton requested he no longer officiate their upcoming fixtures after they appealed against the red card he showed defender Jan Bednarek in their 9-0 loss to Manchester United.

Then on 6 February West Ham manager David Moyes said he was “embarrassed” for the 52-year-old after he gave Thomas Soucek a red card for elbowing Aleksandar Mitrovic.

Again, that decision was quickly rescinded.

On 8 February the official Notified police after his family received a number of threats, including death threats, and abusive messages.

Numerous referees and players – including Soucek – came out in support of Dean and his family, with the official not taking charge of a Premier League fixture last weekend at his own request.

Lack of goals has been ‘very tough’ – werner

What happens when the Premier League dream dies?