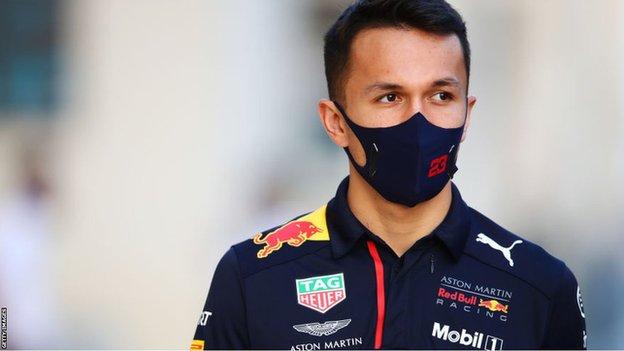 Red Bull’s Alexander Albon says he is determined to return to the Formula 1 field in 2022 after being demoted to reserve driver this season.

Albon said: “My goal is to be back in a seat and be ready – you never know what will happen with Covid.

“I am confident in myself. I know I can bounce back and that is my target. We just have to see how things work out.”

The 24-year-old lost his race seat at Red Bull after a season in which he scored just under half the points of Verstappen and qualified on average about 0.5 seconds slower.

The team decided to turn to Perez – a proven competitor with 10 years’ experience who had an impressive season for racing point – because they felt he would be a stronger back-up for Verstappen.

However, they have made it clear that Albon remains an important part of the team and is a potential candidate for a race seat in 2022.

Albon admitted that the decision was “disappointing”, but added: “Very quickly it was one of those things where there is no point feeling sorry for yourself.

“You have to get back into it and do as much as you can to get back.”

“It hasn’t been all that bleak. There haven’t been any violins in the background. It has been more just getting back into it.

“I have been dropped before. It has not been the first time. But what I learned was how much do I want it. I believe I want it more than anyone on the grid. With that comes a lot of determination and I won ‘ t stop ever. “

Albon is back-up for Pierre Gasly and rookie Yuki Tsunoda at the Alpha Tauri team in addition to the senior Red Bull outfit.

Albon will attend every grand prix with Red Bull and will work in the simulator on development of the 2021 and 2022 cars.

He will also race a Red Bull-branded Ferrari in the DTM German touring car championship.

“There is no actual driving (in F1) unless something happens,” Albon said. “I have the DTM gig, which I will do to the best of my ability.

“And on top of that the team know what I’m capable of, they would have got rid of me if they didn’t believe in me. They still trust me and still have faith in what I do.”

Last year’s Red Bull had handling difficulties that hampered Albon and lacked the performance of the dominant Mercedes.

The team are hoping to resolve the balance issues and improve performance sufficiently for Verstappen to mount a challenge to Lewis Hamilton in 2021.

“This year (it’s about) trying to address some difficulties with last year’s car,” Albon said, “and then into this year, simulator support, being there for all four drivers, including Alpha Tauri.

“If there is any situation when I’m needed, I’m there for the team.”