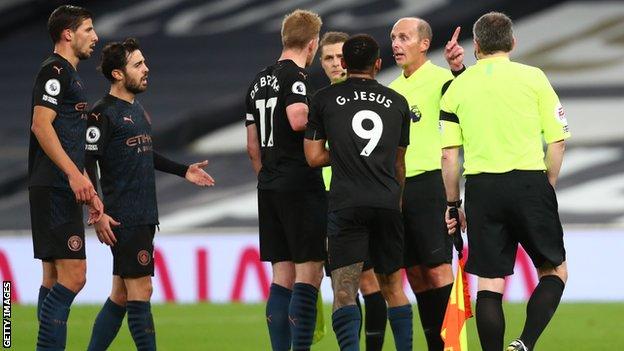 New rules and new technology were supposed to reduce the number of controversial incidents in the Premier League, but players and managers appeared to be just as frustrated with refereeing decisions after a number of incidents on Saturday.

It led to an exasperated Manchester City midfielder Kevin de Bruyne questioning whether there have been too many law changes in football in recent years, leaving everyone to be unsure of where they stand.

“I’ve been playing professional football for 12 years and for nine years there were no rule changes, the past three years there have been a lot. I don’t know why; football is such a nice game,” he told Sky Sports.

City defender Aymeric Laporte thought he had equalised in the first half at the Tottenham Hotspur Stadium, but it was ruled out when replays showed team-mate Gabriel Jesus had controlled the ball with his hand in the build-up.

De Bruyne, though, thought it was a goal according to the latest regulations, brought in at the start of this season, as he felt the ball had hit Jesus’ upper arm.

“I don’t know the rules any more, honestly,” he added. “I thought that if it hits above the arm, it is not handball any more with the law changes.”

What rules have changed in football?

The handball law was tightened at the start of this season, with the International Football Association Board (Ifab) defining the boundary between the shoulder and the arm as the bottom of the armpit.

The Premier League also decided to take a much stricter approach to handball decisions, in line with the rules changes introduced in Europe the previous campaign.

They are just two of a number of rule changes, tweaks or innovations in the last six years, including:

‘I don’t know what a penalty is now’

Aston Villa boss Dean Smith also expressed his confusion at the latest rules after his side were denied a penalty in stoppage time as they were beaten 2-1 at home by Brighton.

Villa were initially awarded the spot-kick when Trezeguet was caught by Solly March in the area. However, referee Michael Oliver reversed the decision after viewing the incident on the pitchside monitor, with replays showing the Brighton man had got a touch on the ball.

“I don’t know what a penalty is now. We could all hear the contact inside the ground,” said Smith.

“I thought it was the right decision to go the monitor and change it. The referee gets that correct,” he said.

Baggies denied at both ends of the pitch

West Brom boss Slaven Bilic was equally bemused at Old Trafford after his side were awarded a penalty for a foul by Bruno Fernandes on Conor Gallagher, only for referee David Coote to reverse the decision after consulting the pitchside monitor.

“I saw it a few times and for me it’s a penalty,” he said. “There is no reason for Conor Gallagher to go down without being fouled. He touched his shin.”

To make things worse for the Baggies, United were awarded a spot-kick themselves just minutes later for handball by Darnell Furlong.

Bilic accepts it was the correct decision to award the penalty under the new handball rules, but says there was a foul by Red Devils midfielder Fred on Gallagher in the build-up, which should have been spotted by the video assistant referee.

“If it’s for us, I ask for a penalty, but [Darnell Furlong] was unlucky. The new rules – no problem,” he added. “But I have a problem with the foul before. They checked the foul before so I was quite confident but then it was no foul.”

Manchester United boss Ole Gunnar Solskjaer admitted West Brom should probably have had a penalty, though he pointed to the similar incident in the Aston Villa game as evidence the officials are at least consistent with their decisions.

“I looked at a penalty this afternoon, in the Villa-Brighton game, and there’s contact on the ball and then the man,” he told BT Sport.

“In my head, it might be a penalty. Maybe here we’re a tad lucky but none of them are given. Maybe the rules are different to how I interpret them.”

Shearer agreed, saying: “He’s trying his best to get out of the way. Under the laws it’s a penalty.”