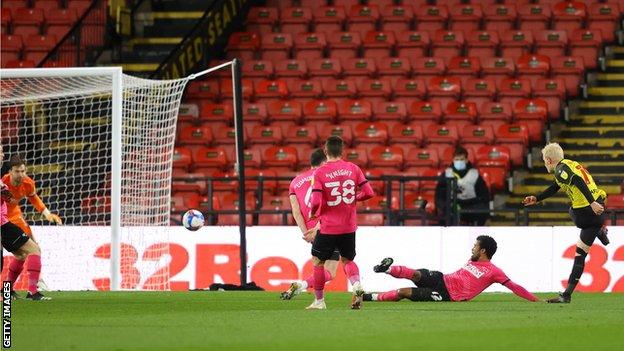 Will Hughes scored against his old club as Watford beat Derby to move third and level on points with second-placed Brentford in the Championship.

In the midfielder’s first game against the Rams since joining Watford in 2017, he guided a low shot into the far corner to double the home side’s lead less than three minutes after Joao Pedro’s fortunate opener.

Brazilian forward Pedro did not know much about his eighth goal of the season as the ball was flicked onto him by Derby defender Andre Wisdom and past David Marshall after a great turn of pace and cutback by Ismaila Sarr.

Colin Kazim-Richards saw a first-half header controversially disallowed for a foul on the goalkeeper by Derby team-mate Wisdom and Wayne Rooney’s visitors fell short despite William Troost-Ekong’s own goal giving them late hope.

A third win in a row sees Watford leapfrog Swansea and move to within four points of leaders Norwich, who host Rotherham on Saturday, while Derby’s six-point buffer over the bottom three could be reduced to three points after Saturday’s games.

Rooney handed first starts to deadline day signings Patrick Roberts and George Edmundson but after a low-key start to the game Watford profited from a slice of luck and then gave himself a cushion.

Hughes’ goal – his eighth in 104 appearances since his £ 8m move from Pride Park – came after Derby failed to adequately clear a corner, and Nathaniel Chalobah backheeled the ball into his path for him to take a touch and calmly finish.

The 25-year-old’s celebrations were muted, having come through the Rams’ academy, but he caught the eye throughout with his range of passing – his inch-perfect ball over the top in the second half volleyed into the hands of Marshall by Pedro .

Wisdom was adjudged to have blocked Hornets keeper Daniel Bachmann as Kazim-Richards headed home a corner, a decision which looked soft, but Derby struggled to create openings until Nathan Byrne’s fine cross bounced up onto Troost-Ekong and into his own goal with 13 minutes remaining.

Replays showed Kazim-Richards was marginally offside as the cross came in but it did not alter the result, with Watford registering a league-high 12th home win of the campaign despite having to deal with a flurry of corners in stoppage time.

“It was a brilliant first half, we played excellently. In the second half when they scored they gave us difficulties until the last minute but it was a good performance.

“We can play better, that’s for sure, but we have a good spirit. Now it is important to have a good recovery because we need to continue.”

“It was difficult when I arrived because we would have been 12 points behind if we had lost against Norwich, but everyone has worked hard and played with passion. I feel very happy with everyone.”

“We conceded two very sloppy goals and I think our reaction to conceding the goal needs to be better – we lost our focus and concentration and that’s cost us in the end.

“Second half we showed a great reaction – I thought we dominated the second half and on another day could’ve got something out of the game.

On the disallowed goal: “It’s clear for everyone to see that it was a perfectly good goal and I still don’t know why it’s been disallowed, maybe the keeper was getting a bit too much protection, but these things happen.”