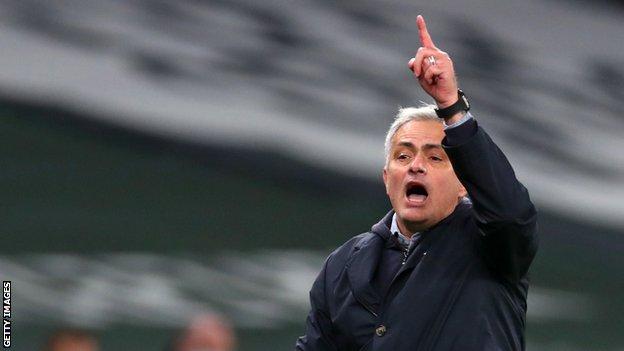 “Awful news followed by worse news”, “talk about a giant leap in the wrong direction”, “they’ve lost the plot”.

When Tottenham sacked Mauricio Pochettino and replaced him with Jose Mourinho on 20 November 2019, the responses from many Spurs fans were a little spiky.

Here was an attack-minded, progressive manager in Pochettino, who had led Tottenham to the brink of domestic and European glory, replaced by an perceived park-the-bus merchant; an apparent yesterday’s man following his sacking by Manchester United.

It hasn’t all been plain sailing, but fast forward a year and Spurs are top of the Premier League table with an evolving squad playing positive football and a seemingly harmonious support.

On Saturday, they achieved arguably their most impressive result of the season – a 2–0 home win over last season’s runners-up Manchester City.

And what of the man who has overseen it all? Has he won over the Tottenham fans?

‘Doing a deal with the devil’

To answer this question fully, we must go back to the beginning.

The quotes that opened this article are among the top rated of more than 3,000 comments on BBC Sport’s story detailing Mourinho’s appointment and represent the more volatile reactions from the Spurs fanbase.

The general response, though, was wariness towards a manager with an undoubtedly record of success but whose achievements had been overshadowed by inconsistent results, accusations of negative football and an ability to fall out with players – Paul Pogba being the most high-profile example.

It also did not help that he was so ingrained in the Premier League rise of Chelsea – one of Tottenham’s fiercest rivals.

Mourinho himself spoke of humility and lessons learned at his Spurs unveiling. But Simeon Daniel, who along with his brother Ben runs WeAreTottenhamTV,external-link told BBC Sport that the appointment felt like a compromise at best.

“I think a lot fans felt like we were doing a deal with the devil,” he said.

Ben continued on the theme: “I felt like we were selling our soul.”

“When my brother asked me if I wanted Mourinho as manager, I said: ‘No chance do I ever want him. He’s a dinosaur. Look what happens to him at every job. He’s a ticking time-bomb.’

“There was a definite split. Half the fans we spoke to were saying that he was a born winner, that he wins everywhere he goes and that it was what we needed after Pochettino, who had brought so much positivity but was missing that first trophy .

“But the other half saw him as a Manchester United / Chelsea reject who was past it.”

“I remember in some of the early days, songs backing Mourinho would start in the crowd and others would grumble, saying they couldn’t sing his name.”

The squad Mourinho inherited had been allowed to pass its peak as the club balked at the kind of transfer activity planned by their nearest rivals and focused their energies instead on the building of a new stadium.

When Pochettino was sacked, they were without a win in five, leaving them 14th in the table and 20 points behind then-league leaders and eventual champions Liverpool with only 12 matches of the season gone.

They would struggle for consistency under Mourinho for the remainder of the campaign, eventually finishing sixth thanks to an impressive post-lockdown unbeaten run of six matches.

The promise of that mini-run has been realised so far in 2020-21, with six wins from nine games producing 21 goals and moments of attacking brilliance.

Saturday’s game was a masterclass of game management, showcasing a defensive rigidity to keep the city at bay and lightning-quick, ruthless counter-attacking to pick them off.

It has re-energized the fanbase, prompted realistic talk of a title challenge and altered many perceptions of Mourinho.

“I have been proved completely wrong,” said Ben. “I am 100% on the Mourinho bandwagon.

“I think a lot of fans got on board after lockdown. You saw a different Tottenham when they came back. That is when the belief started to grow.

“Such is the nature of football fans, you get the odd fan here and there who still doesn’t like Jose. But as a whole the feelings are overwhelmingly positive.”

How has Mourinho changed opinion?

Ultimately, by winning games of football.

However, the Daniel brothers feel the seeds of his newfound popularity were planted by events off the pitch, captured in the Amazon documentary, ‘All or Nothing’, which charted the club’s 2019-20 season.

“He came over as so charismatic. You can’t not want to watch him,” said Simeon. “We even heard from rival fans who fell in love with him after watching the doc. It was a fantastic PR move by the club.”

“After the documentary, Mourinho had Tottenham fans eating out of the palm of his hand,” added Ben.

He has also impressed in the very areas for which he was criticized at Manchester United – recruitment, tactics and man-management.

“I’m just over 30 now and the last summer transfer window was the best of my lifetime,” said Ben, who saw his side bring in Pierre-Emile Hojbjerg, Sergio Reguilon and Gareth Bale in the summer.

Simeon added: “We have precision targeted the weak parts of the team but also brought in a good blend of talent, leadership and experience.”

Spearheaded by a remodelled version of the already prolific Harry Kane / Son Heung-min pairing, which has seen the former operate in a deeper, creative role, Spurs are the second-highest scorers in this season’s Premier League.

The 11 goals they have scored in the opening 45 minutes of games alone is more than Manchester City have netted overall in the competition this season (10).

Son is the division’s top scorer with nine, including the opener against City, while Kane has a league-high nine assists.

“Last season, Mourinho didn’t go out specifically to win every game as he felt there were some we couldn’t,” said Ben. “He said recently that he would not accept a draw this season. He sets up to win games.”

On the man-management front, his most high-profile dealings have been with Dele Alli and record signing Tanguy Ndombele, both talented midfielders, but with questions over their application.

Alli has been absent from the first team for much of this season, but never frozen out, while Ndombele is currently playing the best football of his Tottenham career, which he was announced through the chipped assist for Son’s goal on Saturday.

To truly get a sense of how different the mood around the club and its fanbase is now, you need only read some of the comments on the report of Saturday’s game …

“A Mourinho masterclass … the doubters are decreasing”, “Jose has Spurs purring like a kitten”, “Spurs are contenders this season that’s for sure”.

‘Up to CM Chouhan to Accept or Reject My Resignation’: Imarti Devi Quits After MP Bypoll Loss