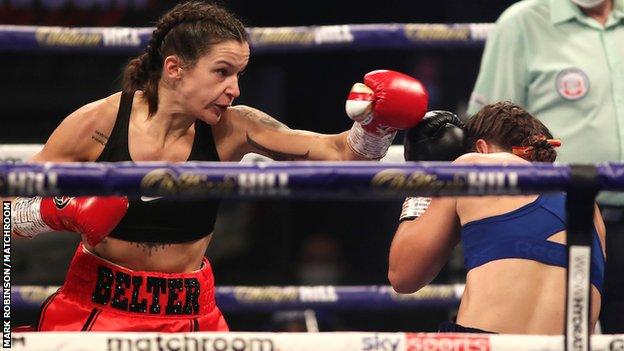 The Briton showcased boxing’s fundamentals throughout, serving up a stiff jab, good footwork and punishing counter punches to take control.

And in the ninth round, a solid body shot hurt Thanderz, allowing Harper to surge forward and force the stoppage.

“That has just made my year,” 24-year-old Harper told Sky Sports.

Promoter Eddie Hearn called Harper’s performance “a dream” and inflicting a first defeat on Thanderz was the perfect response to the social media trolls she says she has faced up to since drawing with Natasha Jonas in August.

“You get doubts, questioning myself,” added Harper. “I hurt my hand in round four so just stuck to jabbing and moving. I felt more mature. I stuck to the game plan.

“The rematch with Natasha Jonas is in my contract and when that is meant to happen it will, but I want to unify the titles and fight the other girls in my division.”

Harper said she would not engage in an up-close battle and would instead stick to her strengths. It is to her credit she was able to do so, landing a solid counter-right in the first round before maintaining the type of jab that can control a contest throughout.

“Use your feet and when you make her miss and make her pay,” she was told by her corner after two rounds.

She duly refused to fall for the feints Norway’s Thanderz served up and slowly broke her down until the chance came to drive home a left to the body in nine.

The way Harper took up her chance to finish will likely boost her confidence further and after a whirlwind year in which she gave up work in a chip shop and became a world champion, this display should convince her she belongs on the world stage.

BBC Sport boxing correspondent Mike Costello: What an impressive performance that was. During the week she said how much she had learned from the Jonas fight, there were lessons learned, she boxed her fight, her way from the start.

BBC Radio 5 Live boxing analyst Steve Bunce: A flawless performance from the first bell until the referee did the human thing. There was a sickening shot to the body, and that was a fantastic piece of work from the referee. Thanderz had taken a steady beating, her heart was broken a little bit by Harper.

Also on the card England’s Rachel Ball maintained her momentum with a unanimous points win over Jorgelina Guanini.

Ball, 29, was supposed to face Guanini for a vacant world title at bantamweight but when the Argentine failed to make weight, a bout was agreed 4lbs higher at super-bantamweight without the reward of a major world title on offer.

Ball – a full-time social worker – shot to prominence by inflicting the first defeat of Shannon Courtenay’s career in August and – after soaking up solid shots from Guanini in round three – she started looking sharper and faster when the pair boxed up close.

Ball – substantially taller than her opponent – never looked to simply use her jab to dominate from distance and the away fighter made the 10 rounds engaging but went down 99-91 99-91 99-92 on the cards.

“I’m happy. It’s been a mad week as we didn’t know the fight would happen,” said Ball, who now hopes to face Australia’s Ebanie Bridges for the vacant WBA title she had hoped to contest against Guanini.