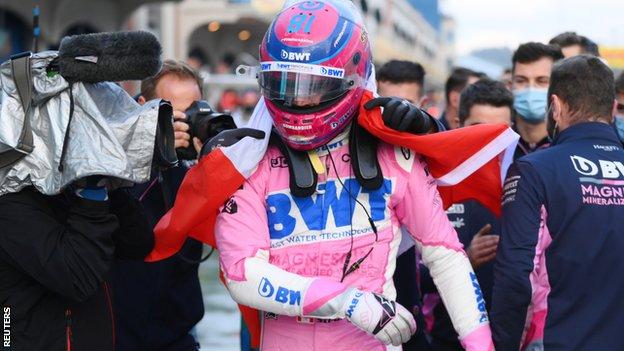 For the first time all year, a Mercedes is not on pole position for a grand prix.

Ironically, though, this development probably makes it even more likely that Lewis Hamilton will become the most successful racing driver in history on Sunday.

Hamilton starts the Turkish Grand Prix from an unexpected sixth place on the grid, after Mercedes struggled in difficult wet conditions on a track surface the world champion said had less grip than any he had ever experienced.

The man in the position more familiar to Hamilton is Canadian Lance Stroll, who took his first career pole in what has to be counted as one of the biggest shocks in Formula 1 in years, if not decades.

The 22-year-old Canadian, whose billionaire father Lawrence has funded his career and now owns the Racing Point team for which he drives, has had his moments in a four-year career, but you would have got very good odds had you wanted to place a bet on Stroll being on pole at Istanbul Park.

He has looked good in the wet before – notably when he qualified a back-of-the-grid Williams fourth at Monza in his debut season in 2017 – and this was a standout performance, even if team-mate Sergio Perez, who had been quicker for much of the session, was baulked on his final lap and had to settle for third.

“Precision, concentration and flow,” Stroll said. “It’s so unpredictable what the car’s going to do. But when everything’s working, the tyres are switched on and the car feels good, it’s like a dance. It’s the only way to describe it.”

To fully deliver on his potential, Stroll now needs to find a way to find that feeling on a more regular basis, and particularly in the dry.

Why wasn’t Hamilton up there?

Saturday’s sessions presented Hamilton with conditions in which he has produced some of his – and the sport’s – greatest performances.

Yet there was something about the combination of a newly laid track surface, still seeping bitumen, and rain that was simply not working for Mercedes.

It was all about that least sexy but most important of Formula 1 technical explanations – tyre temperature.

Racing Point – whose car has been dubbed the ‘pink Mercedes’ because it is pretty much a carbon copy of Hamilton’s 2019 car – could generate it, but for some reason Mercedes’ 2020 car could not.

“We did the best we could and that was as fast as we could go,” said Hamilton. “The track feels terrible, it’s just like driving on ice. But for whatever reason some people can get the tyres switched on better than us.”

The bizarreness of the day was underlined by the fact that Hamilton – who is certainly one of the greatest drivers of all time and has a claim to be the greatest of all – was 4.795 seconds slower than Stroll, who isn’t and doesn’t and is unlikely ever to change that.

As far as clinching the championship goes, though, Hamilton is still very much on favourable ground.

He is on the verge of tying up his seventh world title, which would equal the all-time record held by Michael Schumacher. And, as Hamilton has already surpassed the German’s win record, that would make him the most successful driver of all time.

To keep the title battle going to the next race, Hamilton’s team-mate Valtteri Bottas has to out-score the Briton by more than seven points.

But Bottas is not only starting three places further back than Hamilton, but is also less adept when it comes to the skills of battling on track.

Hamilton already has a head start on his team-mate, and, judging by their respective records, you would expect him to make progress faster than Bottas.

Hamilton knows the title is within his grasp, but has insisted that he will treat this weekend like any other.

“I did the best I could,” he said. “I’m generally happy. I didn’t spin and didn’t make any mistakes and I did everything I could with what I had.”

And he said he would “do the best job I can” in the race.

Would he be patient given what was at stake?

“We’ll see,” Hamilton said. “You have to jump at opportunities if they appear. Congrats to Lance on pole and I look forward to a fight with them.”

The prospects for an exciting race, on a track which has a history of good racing but where the slippery surface adds a new challenge, are good.

Stroll has Red Bull’s Max Verstappen starting alongside him on the grid.

The Dutchman – disappointed to lose out on pole once the drivers switched to intermediate tyres at the end of qualifying, after looking monumentally strong on the ‘extreme’ wet tyres earlier on – will want to take advantage of the fact that the Mercedes have traffic to negotiate before they can challenge him.

The weather is expected to be dry, although there is a 40% chance of rain. But wet or dry, the track will be difficult, and a true picture of form has yet to emerge this weekend.

“We probably looked like amateurs out there,” said Renault’s Daniel Ricciardo, as he reflected on qualifying fifth, behind the second Red Bull of Alex Albon, in a session in which driver after driver was caught out by the conditions, spinning or running wide.

“But the best way to describe it is like a skid pan – you know, when you do those driving courses.

“If it’s wet, it’s going to be wild. But if it’s dry, we know how slippery it is. I would bet a lot of money it is not going to be a boring, straightforward race.”