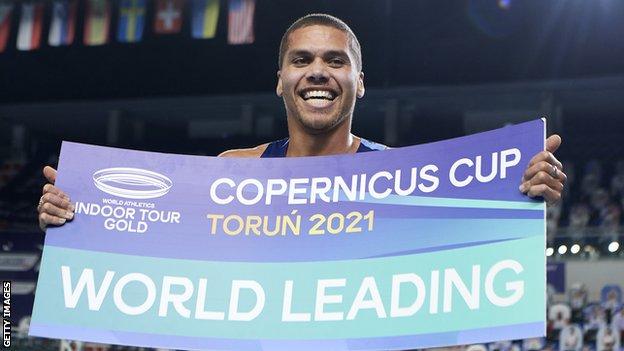 Great Britain will send a 41-strong squad to next month’s European Indoor Championships in Poland.

However, sprinter Dina Asher-Smith and heptathlete Katarina Johnson-Thompson miss out through injury.

Laura Muir had already chosen not to attempt a triple double as she focuses on the Tokyo Olympics starting in July.

The championships take place in Torun from 4-7 March and there will be live coverage on BBC TV.

The 25-year-old recently picked up a quad injuryexternal-link and will now concentrate on the outdoor season, which begins in May.

Asha Philip is another absentee, meaning Britain are without an entry in the women’s 60m.

More names could yet be added to the squad.

“We are awaiting decisions from European Athletics on several field event nominations that we have put forward, so we hope to add several other athletes to the team later this week,” said Christian Malcolm, British Athletics’ Olympic head coach.

“I’ve not set a medal target, it’s an opportunity for these athletes to step up a level. It’s a great stepping stone.”

Johnson-Thompson plans to return to training next month after an Achilles injury and Malcolm remains confident about the 28-year-old’s fitness for the Tokyo Games, which start on 23 July.

“The main focus for her has always been the Olympic Games,” he said.

“For any athlete right now it is the ability to train which is the challenge, and travelling, so the safest option is just to stay focused on the end goal, which for a lot of athletes is the Olympics.

“I have no doubts about her being 100% (in Tokyo). But I don’t have a crystal ball, so I can’t go out there saying things might happen.”