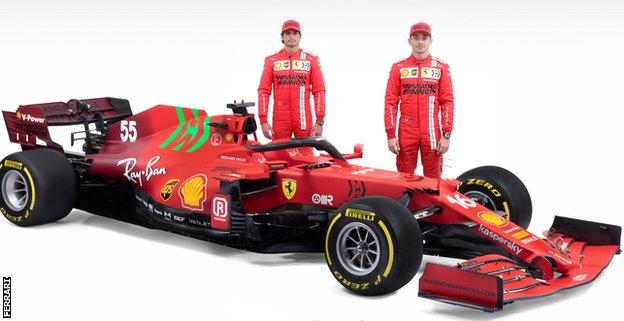 Ferrari have unveiled the car they hope will revive their fortunes after their worst season in 40 years in 2020.

Ferrari has concentrated on the rear of the car in search of performance.

“Last year was a big disappointment. We know we cannot repeat such a bad result,” Binotto said.

Ferrari were sixth in the constructors’ championship with a best result of second place. It was their worst season since 1980, when they finished 10th.

All teams have been restricted in terms of the amount of changes they can make on their cars for 2021 for cost-saving reasons in the pandemic.

Bodywork and aerodynamic changes are largely free, but development of the mechanical and structural parts of the car such as suspension and chassis have been limited to two ‘tokens’.

Ferrari has applied these at the back of the car, in search of greater rear grip, the lack of which was another weakness in last season.

The rear bodywork is noticeably narrower and cut away more deeply than last year, in the quest for better airflow to the rear of the car and therefore greater and more efficient aerodynamic downforce.

In addition, there is a new front wing and nose shape, which has an influence on the airflow that heads under the chassis and then both under the floor and around the aerodynamic shapers either side of the cockpit.

Like many other teams, Ferrari did not reveal the detail of the rear floor design, where rule changes imposed with the aim of restricting performance have reduced the amount of bodywork that can be used.

Clawing back the downforce lost to these changes is likely to be one of the deciding factors in performance this season.

Head of engine design Enrico Gualtieri said the engine had been revised to improve thermal efficiency – a measure of performance with the current V6 turbo-hybrid engines – by changing the design of the turbo and compressor.

Sporting director Laurent Mekies said: “The 2021 season is about the lessons learned from an incredibly difficult 2020 campaign.

“We have tried to learn from our mistakes and improve in the areas where simply we have not been strong enough.”

“Of course in the frozen technical regulations and the new financial regulations we know there is a limit in terms of how fast we can turn things around, but we have been trying to reconstruct methodically our way back to the more competitive part of the grid. “

Binotto added that the team would be unlikely to make major changes to the car during the season as they focused on the major technical rule changes coming for 2022.

“I do believe our car is better than last year,” he said. “We need to be realistic. The gap to the best was very important and not something we can recover in a single winter.

“There is always a balance. But 2022 is such a big change that there is a minimum quantity of exercise and design that needs to be developed so most of the effort will be there.”