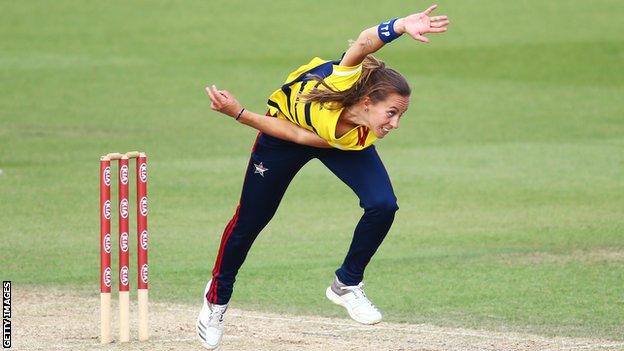 Tash Farrant admits it felt “like the end of the world” when she was let go by England two years ago.

An international sportswoman, who had broken through as a teenager, was faced with the prospects of the real world – the camaraderie of a dressing room replaced by the life of a “normal student” and a job at a school.

Now the 24-year-old is back and in England’s squad for their one-day and Twenty20 series in New Zealand, which begin on Tuesday.

“I’m just really grateful to get the opportunity again because I didn’t think it was going to come at one stage,” she said.

To the real world and back again

Farrant’s first coming in international cricket was one that never quite took off.

She made her first England appearance in 2013 but, despite being a regular in squads, played only 15 games in the next five years.

On her release, then-coach Mark Robinson said England had to be “be cruel to be kind”.

“For me, it was the fact that there wasn’t really much to fall back on, so it did feel sort of a bit like it was the end of the world at the time,” Farrant said.

“I won’t lie – I was very disappointed.”

Farrant’s release coincided with her final year of university. “That was quite nice timing, I guess,” she explained.

“I probably wouldn’t have passed if I was still contracted.”

Then, with the help of former England batter Lydia Greenway, she became head of girls’ cricket at Trent College in Nottinghamshire.

“I absolutely loved it,” she says. “What I said about missing the team, I kind of found that team at the PE department at Trent College, which was lovely.

Farrant was awarded one of 41 full-time Women’s domestic contracts last year but in 2018 such fall-backs for female players did not exist. Farrant continued to work on her game outside the England set-up alongside her day job.

“Initially I was not that positive on whether I’d be able to get back into the squad,” she said.

“But I think I knew within myself, deep down, even if I didn’t want to tell myself it, that I had some unfinished business in an England shirt.”

‘I wouldn’t change it for the world’

Farrant says she feels a “more rounded person” as she begins her second innings as an international cricketer.

She captained South East Stars in the Rachael Heyhoe Flint Trophy last year and will play for Oval Invincibles in the delayed first season of The Hundred in the summer.

On Sunday, the 24-year-old took 1-17 in England’s first warm-up game in New Zealand – her first appearance in England colors since 2018. Three one-day internationals and three Twenty20 internationals follow from next week.

“If someone said to me that I could have that time again and not lose my contract, it probably sounds mad but I wouldn’t change it for the world,” she added.

“I probably needed that time away, on a personal level, to get some normality back in my life but also working things out in cricket for myself, working out my own game.

“I feel a more rounded person I guess now, and much more relaxed at where I am and knowing that I’ve come a long way but still have a long way to go.”