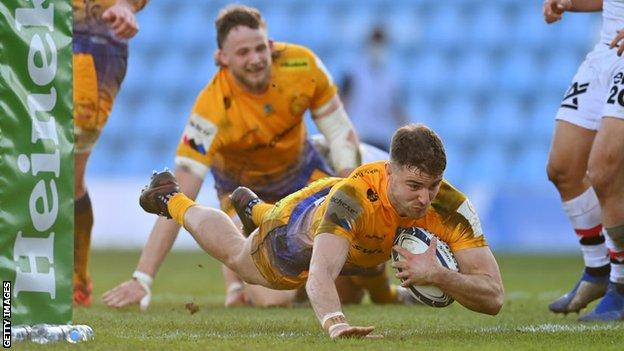 The Chiefs slipped 14-0 down inside 10 minutes as Xavier Mignot crossed soon after Baptiste Couilloud.

But a close-range double from Jonny Hill and tries from Tom O’Flaherty and Ollie Devoto reeled in the visitors.

Exeter were soon out of sight in the second half with Dave Ewers and Olly Woodburn going over as Lyon lost heart and shape.

The victory sets up a blockbuster quarter-final against bookmakers’ favorites and long-time Pro14 Champions Leinster.

Director of rugby Rob Baxter will know the Chiefs may well surrender their title with a similarly slow start next weekend.

Lyon burst out of the blocks with Couilloud scampering in after a break by New Zealander Rory Arnold before Charles Ngatai’s mis-pass sent Mignot in at the corner.

The French visitors, sixth in the Top 14, had been helped into their flying start by some uncharacteristic inaccuracy from the Chiefs forwards.

But a stolen line-out and shaky scrum were soon replaced with their trademark efficiency.

A training-ground move sliced ​​apart Lyon’s backline to allow O’Flaherty to score before Devoto went over for a fourth try on 38 minutes.

Lyon’s early burst meant they were still within a converted try at the break. But Exeter disappeared over the horizon in the second half, with Ewers’ score followed by a penalty try as Lyon’s scrum, shorn of sin-binned prop Xavier Chiocci, crumbled.

Woodburn dotted down from replacement scrum-half Stu Townsend’s canny kick. The visitors finished as they started, Dylan Cretin cantering in at the corner in the final play of the game – but it was too little too late after their fast start.

The sight of Joe Simmonds limping out of the action will be a concern to Chiefs fans with such a tight turnaround to the arrival of four-time winners Leinster at Sandy Park.

Number eight Sam Simmonds – the Premiership’s leading try-scorer – didn’t score, but made metres in the loose and secured a superb turnover in close combat.

However, it might be Hill who made the biggest impression. The second row started England’s first three games of the recent Six Nations, but dropped to the bench behind Charlie Ewels for the final two matches.

As well as his two tries, Hill got through a stack of tackles and dug in on the breakdown dirty work.

There was no sign of British and Irish Lions coach Warren Gatland in the stands, but Stuart Hogg and Hill’s second-row partner Jonny Gray also shone in performances that might well interest the New Zealander.

Exeter director of rugby Rob Baxter: “We had one of those funny starts and it proved that we needed a game.

“The fact is these guys have been away a long time now. That’s only the second or third game that Henry Slade or Jonny Hill have featured for us because of their unavailability for internationals.”

“And you have the Scotland lads and Tom Francis going back and forth. Couple that with the injuries we’ve had and you have a much-changed team.

“We just needed that time to align and I’m really pleased that happened now. We needed a game to give us a chance at being better next weekend.”

“We started the process of improvement. After this I’d expect us to be at least 10% better.”