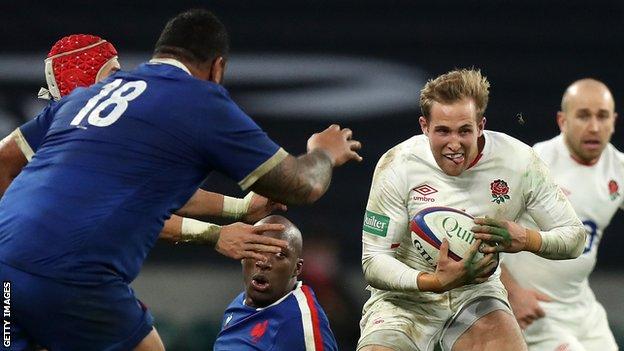 Max Malins will make his first start for England after being named at full-back for Saturday’s Six Nations match with France at Twickenham.

Malins is one of three changes from the side beaten by Wales, with Luke Cowan-Dickie starting at hooker and Charlie Ewels named in the second row.

Experienced duo Elliot Daly and Jamie George drop to the bench, as does lock Jonny Hill.

Center Ollie Lawrence is also included in the matchday squad of 23.

England’s title defense is all but over after losses to Scotland and Wales, while France are hoping to get their Grand Slam bid back on track after a coronavirus outbreak in camp.

“We are of course disappointed that we can’t defend the championship, but that makes this an even more important game,” said head coach Eddie Jones.

“We want to show what we are capable of.”

Anthony Watson, who scored a try in the 40-24 defeat in Cardiff, wins his 50th cap on the right wing, and lines up alongside Jonny May and Malins in the back three.

In the forwards, Cowan Dickie makes just his fifth start for his country, joining experienced props Kyle Sinckler and Mako Vunipola in the front row.

Ewels partners Maro Itoje at lock, with an unchanged back row of Mark Wilson, Tom Curry and Billy Vunipola.

Grand-Slam chasing France are unbeaten in the tournament so far, but have not played in a month after a coronavirus outbreak forced the postponement of their round-three fixture against Scotland.

“The squad have competed really hard in training since Sunday,” added Jones.

“I believe this is the best 23 to really take the game to France and get us on the front foot.”