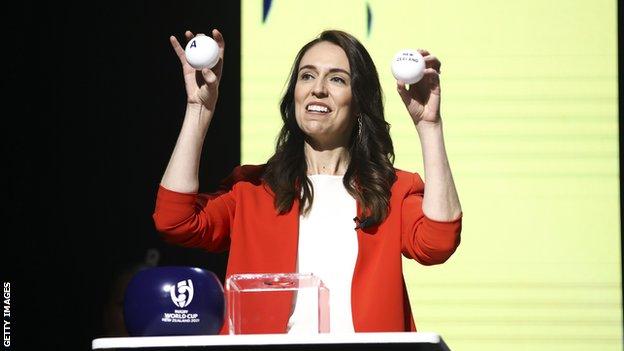 Australia feature in a challenging Pool A for Wales, with the fourth team yet to be determined in qualifiers.

Ireland and Scotland are yet to secure their places in the tournament and their qualifiers have been postponed.

Former champions the United States are in Pool B alongside Canada and yet-to-be-determined qualifiers from Europe and Asia.

Back-to-back Six Nations Grand Slam champions England are currently ranked number one in the world after beating France last weekend, but prop Sarah Bern said they were “taking every game as it comes”.

She continued: “It would be complacent to go into any tournament thinking you have momentum behind you. You just have to play each game on the pitch.”

The European qualifying tournament, which is due to feature Italy, Ireland, Scotland and an unconfirmed fourth team, will now not take place in December because of coronavirus and no new date has been announced.

The winner of that event will earn a World Cup spot, with the runner-up getting another chance in the final qualifying tournament.

Wales, who named Warren Abrahams as their head coach on Wednesday, could end up in a pool with Ireland or Scotland if either team reaches the World Cup via the final qualifying tournament.

The Rugby World Cup will take place from 18 September-16 October, with the final being played at 50,000-capacity stadium Eden Park.

World Rugby announced in 2019 that it was removing ‘Women’s’ from the 2021 event’s title, referring to it as ‘Rugby World Cup 2021’ to promote equality.

New Zealand Prime Minister Jacinda Ardern referenced the fact that fans are now allowed at sporting events in the country, saying: “Pre-Covid-19 this tournament was going to be important for New Zealand.

“Now it takes on a new dimension around the whole world. I am confident these games will be packed with fans young and old.

“This World Cup is an opportunity to grow the game here but also internationally. An opportunity to showcase our elite athletes and to keep breaking down gender discrimination in sport.”