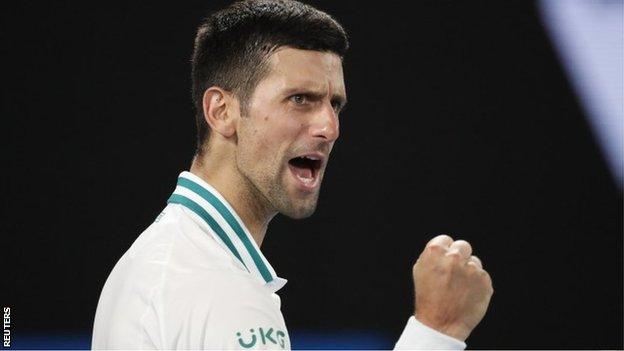 Despite the world number 114 causing moments of tension, Djokovic had enough quality to win 6-3 6-4 6-2.

The 33-year-old Serb won the final four games to finally shrug off Karatsev.

Djokovic, who is going for a record-extending ninth title in Melbourne, will face either Daniil Medvedev or Stefanos Tsitsipas in Sunday’s final.

Russian fourth seed Medvedev meets Greek fifth seed Tsitsipas in the other semi-final on Friday, with both men trying to reach their first Australian Open final.

Neither player has won a major title yet and will face an opponent in Djokovic who is bidding for an 18th Grand Slam to close the gap on Roger Federer and Rafael Nadal.

Djokovic has struggled with an abdominal injury during the tournament but showed no signs of the problem against Karatsev.

“This is the best I have felt in the entire tournament. It felt great, I could swing through the ball and no pain,” he said.

“It was my best match so far and came at the right time. I’m thrilled.”

Nobody has mastered the Australian Open men’s singles like Djokovic, who says the event “feels like home” after dominating the tournament since winning his maiden title in 2008.

Djokovic has lost just three matches at Melbourne Park over the past decade and losing to Karatsev would have been a seismic shock ranked among the game’s great upsets.

While Djokovic was playing in his 39th Grand Slam semi-final, Karatsev had never even played in a one of tennis’ four major tournaments before this fortnight.

There was a piece of history, however, which offered hope to the Russian. Djokovic had lost to an opponent ranked as low as Karatsev once before on Rod Laver Arena – when he fell to Uzbekistan’s world number 117 Denis Istomin in the second round in 2017.

While Karatsev pushed Djokovic and worried him at times with powerful hitting, a repeat never seriously looked like happening.

Little separated the pair as they stayed on serve in the opening seven games, before a loose eighth game from the Russian allowed Djokovic to pounce for 5-3 and then serve out to love for the opening set.

Fears the match would quickly run away from Karatsev looked justified when Djokovic opened up a 5-1 lead in the second. But Karatsev, like he had throughout the tournament, hung in.

After clawing one of the breaks back, Karatsev saved two set points as Djokovic tried to serve out again – and, to the pleasure of the Melbourne crowd allowed back in to watch, threatened to break again to level.

Djokovic looked pensive as he was forced to dig deep, letting out an explosion of emotion as he eventually got over the line to take a two-set lead.

Yet again, the third set did not prove to be the procession which Djokovic might have hoped.

Karatsev rallied to wipe out an early break of serve before Djokovic, still looking tense, reasserted his control as the Russian tired.

Djokovic sealed victory with an ace down the middle, baring his teeth and clenching his fist as a steely celebration indicated his relief.