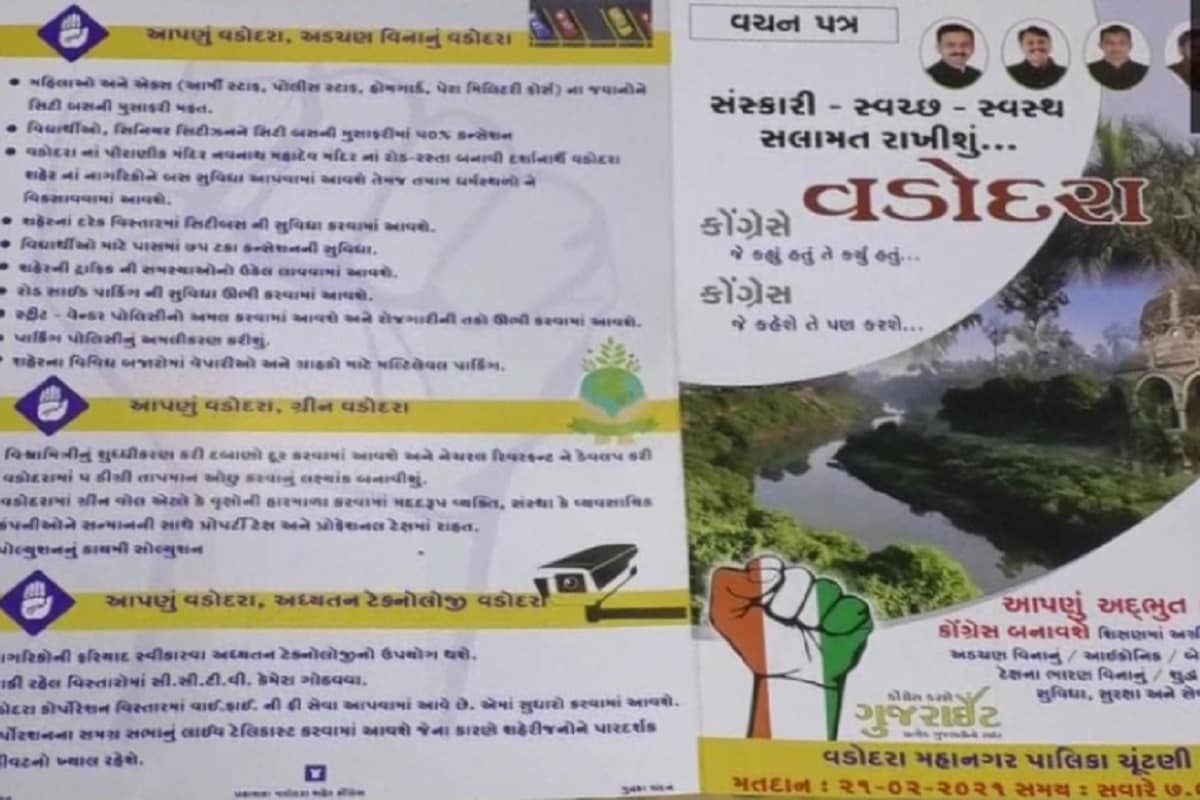 In its manifesto for the Vadodara Municipal Corporation elections due on Sunday, the Congress party has promised “date destinations with coffee shops” for the “youth, students, couples and corporates”, drawing the ire of the Bharatiya Janata Party. Besides these coffee shops, Congress has promised English medium schools for each zone and modern schools for free education and party halls for women’s kitty parties.

The Congress’ manifesto is in line with its promise for an “Iconic Vadodara”. If voted to power, the party said it will introduce “ultra modern schools offering free education”, English medium schools in every zone, which will lower the drop-out rate, apart from boost for health facilities, as well as, lower property tax slabs and other civic amenity charges.

Meanwhile, dubbing the Congress’ manifesto an “influence of Italian culture”, the BJP said that it has “offended the people of the cultural city Vadodara”. Vadodara BJP president Vijay Shah said, “It can promote love jihad. We are against it.”

The BJP, which is yet to release its manifesto, lashed out the Congress, calling the promise of dating destinations “malicious”. Party general secretary of Vadodara unit, Sunil Solanki, said, “The Congress is known for making thoughtless comments during election times just to lure voters by hook or by crook…. But the voters and especially the youth… can tell right from wrong. Is dating a part of our culture? The Congress has no respect for the values of the Indian society.”

Responding to the barbs of the BJP, Vadodara Congress president Prashant Patel, who released the manifesto, said, “The idea behind the promise is to give the weaker section of the society the space to unwind and relax. Those who can afford to go to cafes in the city have their options but what about those youth or persons from the underprivileged section?”

“When the party ran the ‘Hello Gujarat’ campaign, asking people to send their suggestions on what they would like the party to do, many youths mentioned how they couldn’t afford to go to cafes today. These cafes will be run by the civic body if we come into power. It will also help in generating employment apart from bridging the gap between sections of society… many couples who live in joint families have financial constraints and often cannot communicate or discuss private issues at home… They will get a space to spend time with each other at afforable prices… what is the harm in spreading happiness,” he said.

“This is the BJP’s mindset. They never see women and underprivileged section as equals with the rest… If going to cafes is Italian culture, why are there coffee shops around at all? Only affordable cafes bring in Italian culture… What are they talking about in 2021? They should really come out of their regressive mindset and smell the coffee themselves,” he added.

Meanwhile, Gujarat BJP spokesperson, Yagnesh Dave, said on Wednesday, “The Congress has shown that it is unwilling to come out of the influence of Italian culture. This action of the Congress has left the youth as well as corporates of the sanskaari nagri Vadodara extremely offended… Whenever people of the country need the Congress leader Rahul Gandhi to be among them, he quietly escapes to secret tours…”

The saffron party has been in power in the municipal corporation in Vadodara since 1995.