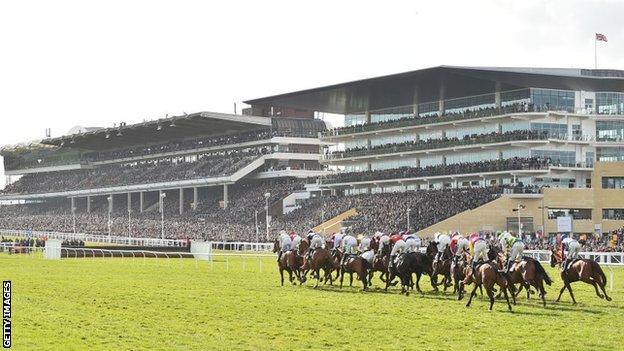 Racing chiefs hope next week’s Cheltenham Festival will be ‘a shop window’ for the sport after it was rocked by negative headlines.

Last year’s meeting attracted criticism for continuing while the coronavirus crisis was in its early stages.

“We have learned a great deal if we look back at that time. We were at the beginning of that learning curve,” said the British Horseracing Authority’s (BHA) chief medical adviser Dr Jerry Hill.

The Festival – which starts on Tuesday and usually has a total weekly attendance of 250,000 – will this year have a separate ‘Irish village’ to house stable staff at the racecourse.

During a media briefing, racing chiefs also faced questions about the case of Irish trainer Elliott, whose horses are being trained by Denise ‘Sneezy’ Foster while he serves his suspension.

‘We are not naive’ – BHA Chief

Elliott, the Festival’s top trainer in 2017 and 2018, had his training license suspended for a year – six months of which are suspended – by the Irish Horseracing Regulatory Board (IHRB) on Friday.

Foster has stepped in to oversee his horses, Although eyebrows were raised when a tweet from Elliott’s account on Saturday suggested he would be available to ‘assist’ before the post was quickly deleted.

BHA chief executive Julie Harrington said: “We are really pleased our colleagues in Ireland acted swiftly so that this isn’t hanging over us throughout the festival. That’s not as simple as saying draw a line under it and move on.”

“I’m in contact with the IHRB around understanding what those conditions (around his suspension) are for the good reputation of racing in Ireland and Britain.”

Harrington has warned the Elliott case, and a video of jockey Rob James climbing on a dead horse at another gallops, leaves the sport facing an ‘existential’ crisisexternal-link and it must take steps to retain and broaden its audience – the “spectators of the future”.

“Cheltenham and all the other major festivals are a real opportunity for the sport to be in the shop window and show the positives,” she said.

Racecourse managing director Ian Renton added: “I’d love to think we can park those (negative headlines), put them behind us, and look forward to all the opportunities.”

While spectators and racehorse owners will not be allowed, special areas are being created to minimize mixing of jockeys, trainers and stable staff – with a red zone for the home contingent and green zone for Irish visitors.

There will be two separate stable yards and stewards’ rooms.

“The only time the two cohorts will come together is when they find their way to the paddock and the horses are off to the start,” said BHA chief regulatory officer Brant Dunshea.

Most stable staff will be housed in 104 temporary en-suite units in the Best Mate Enclosure, and people will not be allowed to leave the area.

Irish trainers and jockeys will largely be in two wings of a nearby hotel, with shuttle transport connecting direct to the course from a private driveway.

“It has been a fairly massive undertaking to ensure we can accommodate the Irish here in the safest possible way,” said Renton.

Irish jockeys, trainers and staff are being regularly tested before arriving in the UK and ‘isolation units’ will be available should there be any positive cases.

No word on frost

Harrington declined to comment on reports the BHA has been investigating the treatment of jockey bryony frostexternal-link by other riders.

Frost, who first aired concerns publicly after winning the King George VI Chase with Frodon on Boxing Day, rides the horse again on 19 March as she seeks to become the first female jockey to win the Cheltenham Gold Cup.

“I don’t want to prejudice any investigation that’s ongoing by speaking publicly about it,” said Harrington.